NWSL season kicks off with a whole new Spirit

The 2018 season was one to forget for the Washington Spirit. But the NWSL side opens 2019 with plenty of optimism, not just for the World Cup this summer, but for the many changes the organization has undergone this offseason.

All things considered, everyone seems to be in agreement that’s a good thing.

The club made sweeping changes at every level, bringing in a new majority owner, a new coach, new front office staff, and turning over nearly half the roster after a deflating 2-5-17 2018 campaign that had few bright spots. They’ll get a first look at how those changes have paid off on Saturday for opening night at the Maryland SoccerPlex, where they’ll take on Sky Blue FC at 7 p.m.

Players didn’t mince words at Thursday’s media day when discussing the sweeping moves and what the difference has meant to them this offseason.

“I think the main thing that I see is that I’m treated as a professional both off and on the field,” said Pugh. “I feel like for the past two years, that was kinda not the case. On the field I’m being held to a high standard not only by myself, but by my teammates and by my coaches. I feel like that really helps me push and elevate my game. (Off) the field, I’m being asked if I need anything, or if the team needs anything, just so we’re comfortable so we can focus on being the best soccer players that we can be.”

The kind of 2018 campaign the Spirit endured is tough for anyone, but especially players like Sullivan, who was a professional rookie, and who has had so much success in her amateur career at Stanford, where the Cardinal went a combined 81-7-8 in her four years there, culminating in a College Cup in 2017.

“I think what happened throughout last season for me, personally, was the hardest experience I’ve had with soccer,” she said. “At the end of last season, I needed to completely regroup and mentally put a lot of time into myself and my soccer there, because it was damaged. So now I feel so much stronger. I think we’ve learned a lot, but we’ve gone through that enough. So I’m excited to see the implementation of what we’ve learned to do something positive.”

Veteran midfielder Tori Huster has seen the ups and downs over her career and knows even some of the minor changes the club has implemented can help the psychological reset in 2019.

“The locker room has changed, we’ve even switched sides that we sit on. All of those little changes add up to make it feel like something new and something we want to buy into and get behind,” she said.

Those aren’t the only new things this year. The team will have select games broadcast on NBC Sports Washington and Yahoo Sports, and the entire season on Monumental Sports Network. The Spirit will also play a pair of games at Audi Field — Aug. 24 vs. Orlando and Sept. 14 vs. Seattle Reign FC — after a successful debut there last season that drew a club record 7,976 fans despite the tough on-field results.

It’s tough to pin expectations on this year’s team, especially with such a young core that will miss time in the middle of the year for the Women’s World Cup in France this summer. In addition to the Americans, Australians Amy Harrison and Chloe Logarzo are expected to play, along with Cheyna Matthews for Jamaica. That turns the NWSL campaign into something of a three-act play.

“We’ve looked at it from the very get-go when we came in as three mini seasons: A pre-World Cup, a World Cup period, and a post-World Cup,” said new head coach Richie Burke. “Fortunately, we’ll have these players for two of those seasons, and hopefully we’ll do very well at that time.”

For the middle swath — starting June 15 and ending whenever the departing players have regained their fitness, with the final July 7 — it will be up to the veterans like Huster to hold down the fort and fight for every point. It’s a situation she’s been through before during the World Cup cycle four years ago.

“In 2015, when we had players away, we were able to get a lot of wins, so I think that is extremely important. If you pick up points during that June break, I think that could just set you up for an easier third season, as Richie would put it,” said Huster.

They’ll cross that bridge when they get there. For now, everyone’s just happy to be back in uniform, with a clean slate and a full schedule ahead.

“I feel like it’s been so long since we’ve actually played an NSWL game,” said Pugh who, despite her coach joking that he expected a hat trick from her, kept her goals for Saturday more open-ended.

“Honestly, just put on a good show for our fans.” 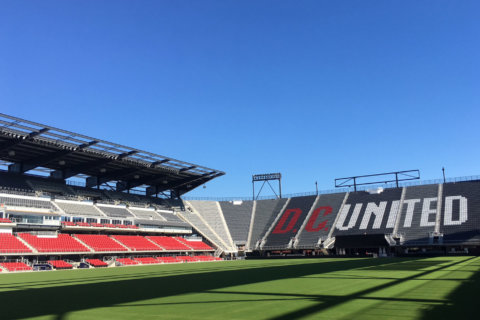 Hamid gets 4th shutout in 6 games, United plays to 0-0 draw

Loudoun United will play some ‘home’ games at Audi Field