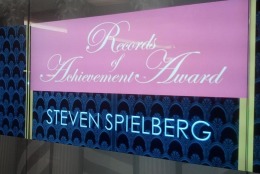 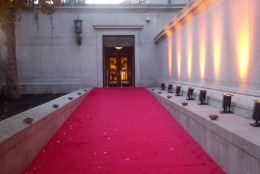 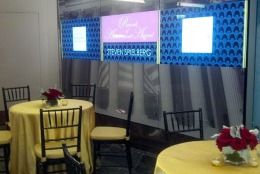 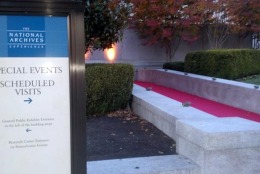 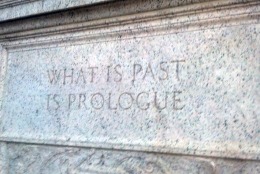 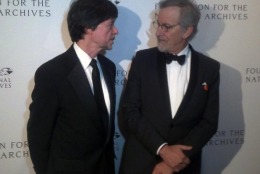 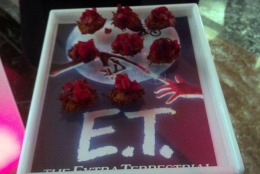 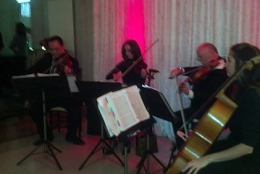 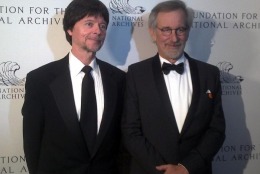 Tuesday night, the National Archives rolled out the red carpet to honor him with its 2013 Records of Achievement Award.

“That’s called a two-shot,” he told a photographer, drawing laughter amid the camera flashes.

The award was presented by past winner, documentary filmmaker Ken Burns (“Baseball,” “The Civil War”), who expressed the utmost respect for his narrative-style counterpart.

“This is the greatest director we have in our country, who has the courage to take on such extraordinary subjects as the Holocaust and difficult passages in American history having to deal with race and having to deal with so many aspects that we leave unexamined,” Burns said.

“The fact that he does it with hugely popular movies is great, and the fact that he is a consummate artist so that all of these films are masterpieces, I think makes this evening particularly special.”

Click on the photo to see the top 10 Spielberg flicks.

Executive Director of the Foundation for the National Archives Patrick Madden says Spielberg was a no-brainer for this year’s honor, particularly after the success of “Lincoln” (2012).

“‘Schindler’s List,’ ‘Saving Private Ryan,’ ‘The Color Purple,’ ‘Amistad,’ ‘Lincoln.’ These are all films that brought history to life,” Madden said. “So to be able to give this award to Steven Spielberg on the 150th anniversary of the Gettysburg address, it’s a culmination of his life’s work.”

The Gettysburg Address anniversary brought Spielberg’s “Lincoln” journey full circle, as the National Archives provided much of the film’s research in pre-production. You might even say the Archives provided the exact opposite of the secret warehouse in “Raiders of the Lost Ark” (1981), where the Biblical Ark of the Covenant was stashed amid a sea of wooden crates.

“They don’t know what they’ve got in there,” Indiana Jones said.

But Lincoln biographer Doris Kearns Goodwin, screenwriter Tony Kuchner and the rest of the “Lincoln” film crew knew exactly what to look for.

“We were here researching what we needed in terms of props and all kinds of artifacts,” said Spielberg.

“So in a sense, I’m so honored that they’re honoring me, but I feel like honoring them right back.”

Burns says the work of filmmakers is just as important as formal scholarly research, because it has a unique ability to enter the public imagination and social consciousness.

“What trickles down from these popular films like ‘Lincoln’ or ‘Amistad’ or ‘Schindler’s List’ affects how much we read and the kinds of questions we ask at the dinner tables and our classrooms,” Burns said.

And so, Spielberg’s motto echoes a quote etched into the exterior of the Archives near the Constitution Avenue entrance. It reads: “What is Past is Prologue.”

“We live in two directions, toward the future and not enough in the past, and I think the greatest treasures are what came before us,” Spielberg said.

“History is the most exciting thing we’ve got.”