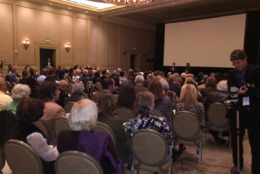 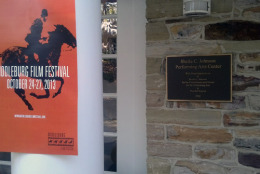 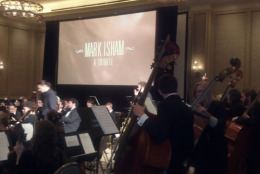 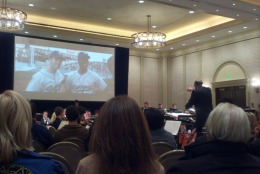 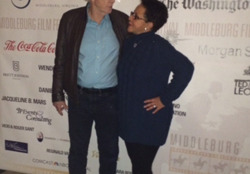 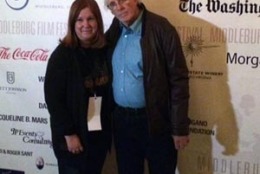 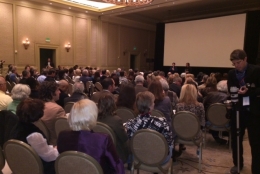 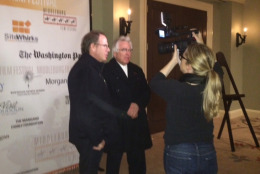 It’s also the home of Sheila Johnson, a Chicago native who moved to Washington in 1972 and Middleburg in 1996, so her daughter could perform as a professional horseback show jumper.

She’s worn many hats in her life. In 1979, she co-founded Black Entertainment Television (BET). In 2005, she became co-owner of the Caps, Wizards and Mystics. And this year she both executive produced “The Butler” and opened the new Salamander Resort & Spa just outside of downtown Middleburg.

But it was as a board member for the Sundance Institute that she had an epiphany for Virginia.

“Robert Redford actually came to Middleburg to visit with me,” Johnson said.

“He looked out over the town and said, ‘You should really put a film festival out here.'”

Its logo features a horse galloping across frames of a film strip, recalling Eadweard Muybridge’s 1878 photographic experiment to see if all four hooves ever left the ground at the same time. They of course did, and cinema was born.

It’s a reminder that sometimes in life you just have to take a leap, all hooves in the air at once, reins be damned.

The film fest opened Thursday night at the Salamander with a screening of the acclaimed indie film “Nebraska” (2013), the latest from director Alexander Payne (“Sideways,” “The Descendants”).

The movie opens nationwide Nov. 22, but festival attendees got an early look, along with a chance to meet producers Albert Berger and Ron Yerxa (“Little Miss Sunshine”) and veteran star Bruce Dern (“They Shoot Horses, Don’t They?”). Dern plays a drunken father who journeys from Montana to Nebraska with his estranged son (Will Forte) to claim a million-dollar sweepstakes prize.

“He won Best Actor at Cannes for his role and he’s talked about as a definite [Oscar] contender,” said Johnson, who joked that she’s pulling for “Butler” star Forest Whitaker for selfish reasons.

If you missed Dern’s Q&A on Thursday night, you can catch him Friday at noon for an hour-long discussion with New York Times film critic Janet Maslin.

Elevating “good films” to “great films” is partly the job of the music composer, and the Middleburg Film Festival has two events showcasing the best in movie music.

The second comes Saturday morning with a master class by “Austin Powers” (1997) composer George S. Clinton. Clinton chairs the Film Scoring Department at the Berklee College of Music in Boston, but no musical background is needed to attend the master class.

Saturday night, get those tastebuds ready for a special wine tasting with longtime film producer Michael Shamberg, whose credits include “The Big Chill” (1983), “Pulp Fiction” (1994), “Erin Brockovich” (2000) and “Django Unchained” (2012).

Sunday brings a screening of Johnson’s pride and joy, “The Butler,” as well as a Q&A with director Lee Daniels and journalist Wil Haygood, who wrote the Washington Post article that inspired the film.

“I had to bring ‘The Butler’ to Middleburg,” Johnson said.

“A lot of people have seen it, but I want it to keep having legs all the way up to the Oscars,” she said.

Johnson says it was a conscious decision by Harvey Weinstein to release the film in August, as opposed to the fall season when many Oscar contenders hit theaters.

It’s not everyday you get to ask filmmakers why they made their movies the way they did.

“You really get to see behind the scenes. You get to not only see these films, but see and hear how they were made,” said the festival’s Executive Director Susan Koch, a longtime filmmaker who worked with Johnson and Leonsis on the documentary “Kicking It” (2008), which played at Sundance.

“This is something that Sheila had been wanting to do for a while, and this year, when we were at Sundance, she said, ‘Let’s do it. Let’s go for it.'”

The location couldn’t be better for it.

“Middleburg is the most stunning location,” Koch said.

“The more time I spend out there, the more I realize this is really the perfect place for a film festival that’s intimate and accessible. It’s just 30 minutes from Dulles and an hour from Washington, D.C.”

Johnson said she hopes the accessibility will attract local residents.

“One of the ideas of bringing the festival to Middleburg is to help locals cast their net wider in the sense of what’s really going on out there in the world,” Johnson said.

“To be able to see first-rate films, those that have not even been released in the theaters yet. We have Academy Award contending films in there.”

The lineup also features a number of films you may never get a chance to see elsewhere.

It also features documentaries “like “Muscle Shoals,” “Mandella: Long Walk to Freedom” and “The Armstrong Lie,” about the Lance Armstrong cycling doping scandal.

“There are so many great films that get made and people never get a chance to see them, so I hope people go see some of these films that they may not recognize, but I guarantee they’ll be bowled over by them,” Koch said.

“A lot of these smaller films do not get the distribution that they need, so we’re really giving them a platform to show all this talent and we’re really excited about it,” Johnson said.

With each new screening, Johnson and Koch gallop on, four hooves in the air, across gorgeous Virginia horse country, headed for the horizon like a pair of cinematic Sundance Kids.