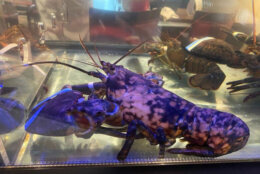 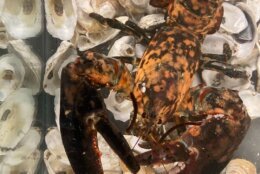 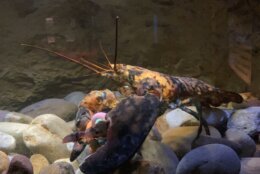 Freckles, the one in 30 million calico lobster discovered at the Manassas Red Lobster in April 2021, has died at the Virginia Living Museum in Newport News.

“Like all crustaceans, lobsters must shed their exoskeleton to grow. At Freckles’ size, this molting requires a significant amount of energy, to the point in which older animals may not survive,” the post said. “Modifications were made to his enclosure by the aquarium’s staff, but sadly he was unsuccessful at completing his molt and passed overnight.”

Freckles lived at the museum in Newport News after Red Lobster staff spotted something unusual in a shipment of live lobsters to the restaurant on Broken Branch Boulevard off Sudley Road. One of them had a striking orange and black speckled shell.

Employees named him “Freckles” and spared him the cooking pot, instead calling in conservation experts.

The University of Maine’s Lobster Institute estimates the odds of catching a calico lobster are 1 in 30 million, nearly 10,000 times less likely than being struck by lightning, according to Food and Wine magazine.

Red Lobster donated Freckles to the Virginia Living Museum where he became an ambassador for his breed.

Rare lobsters do turn up every now and then at Red Lobster restaurants.

In 2020, a Red Lobster in Cuyahoga Falls, Ohio, donated a rare blue lobster named “Clawdia”– a 1 in two million finding – to the Akron Zoo, who also helped make the connection for “Freckles” new home with the Virginia Living Museum, the restaurant said in a news release.

The museum said calico lobsters seldom survive in the wild because their bright colors make them susceptible to predators.