What Ronald Evans does in the classroom with his students is very hands-on. The lessons learned are edible, and the experience students gain translates to the work world.
Listen now to WTOP News WTOP.com | Alexa | Google Home | WTOP App | 103.5 FM
(1/4) 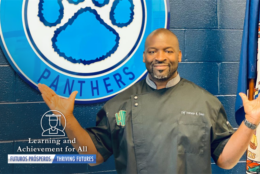 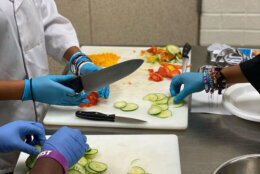 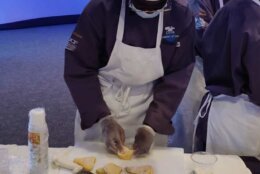 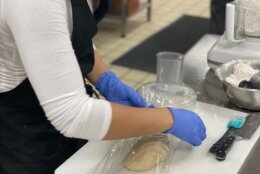 When Ronald Evans was preparing to take over as chef instructor at Potomac High School during the summer of 2017, he considered ways to get more involved with the community.

Not familiar with the Dumfries, Virginia, neighborhood, Evans sought to make new connections. As part of that process, he entered a local Cheesecake Factory and asked for business cards. The staff was confused, he said, assuming Evans was interested in applying to become a server.

Instead, he spoke with restaurant leadership for about 20 minutes, taking deliberate notes. On his way out, he said that a year later, he’d have a list of students interested and qualified to work at the restaurant.

Evans’ desire to create opportunities for his students beyond the classroom earned him recognition as the recipient of the 2022 Virginia ProStart Educator Excellence Award. The honor is given to instructors who are dedicated to their students and to a ProStart program that offers food service industry skills to be learned in the classroom.

Evans spent 20 years in the Marine Corps, and he uses some of his experiences to promote competition among the juniors and seniors in his classes. During class sessions, Evans will prepare a demonstration in the kitchen and students will mimic it. The classes do things like bake breads and desserts, grow herbs and taste spices.

The course isn’t limited to cooking, Evans said, after a restaurant told him the best way to get students jobs was to ensure they had experience with dishwashing, serving and working as line cooks. Every two weeks, students rotate responsibilities, some of which include managing the storeroom, doing laundry, taking the trash out and serving beverages.

Evans’ students also take ServSafe manager and food handling courses, giving them certifications that may be required in some professional positions. He said his students recently returned from a Cook Around The World competition at Disney in Orlando, Florida, where the students competed against 66 other schools, working to craft an appetizer and main entrée.

At the start of the pandemic, Evans was adamant the class couldn’t proceed virtually like some other subjects. Every week, he hosted a video call with chefs from around the U.S. to keep students engaged. One week, he went to a farm and led a lesson on apple picking. Sometimes, he took students behind the scenes of a restaurant.

To keep the students active, Evans coordinated with parents and students so they could pick up groceries every two weeks. Students would cook for their parents, who would then grade the final product. He periodically asked parents if he could leave recipes and other items at their doorsteps, like an UberEats driver would do.

With the end of the school year approaching, Evans’ students worked on a final project that involved students setting up a pop-up restaurant, creating a menu and executing service for parents, recruiters and local businesses.

“We invite these people in to see that we’re not just a home-ec class, we’re more than that,” Evans said. “We’re actually learning how to do appetizers, main entrees, desserts, service skills, how to talk to people, how to do a resume.”

Evans said his enthusiasm in the classroom is fueled by his Marine Corps background and family, particularly his son, who died last year in a car crash. In a previous text message conversation, Evans’ son predicted his dad would some day earn the recognition.

“I want to show (my kids) that I’m hyped up, I’m a man of God, wanted to do the right thing, always lead a positive life,” Evans said. “And always show that if you don’t like a job, you shouldn’t be working it. But if you like the job, you should love the job. If you’re there, love it.”