2 hurt in crash that closed I-66 for hours in Manassas; driver fled on foot

Two people were hurt early Monday in a crash on Interstate 66 in Manassas in which the driver of one vehicle ran off and the roadway was closed for about seven hours.
Listen now to WTOP News WTOP.com | Alexa | Google Home | WTOP App | 103.5 FM

Two people were hurt early Monday in a crash on Interstate 66 in Manassas, Virginia, in which the driver of one vehicle ran off and the roadway was closed for about seven hours.

Virginia State Police responded to a two-vehicle crash in the eastbound lanes of I-66 at the 48-mile marker in Prince William County shortly after 3 a.m.

Police said a Nissan Altima had a mechanical failure and stopped in the left center travel lane of east I-66.

The driver and passenger of the Altima put on the car’s hazard lights and put a cone borrowed from a nearby work zone behind the vehicle. They then went and stood behind a retaining wall while they waited for a wrecker to get there.

Police said that within minutes, a Kia Forte slammed into the back of the disabled Nissan. The Kia’s driver ran off; police said he crossed the westbound lanes of I-66 and disappeared into the woods.

Prince William County and Fairfax County police worked with the state police to search for the driver, but he hasn’t been found yet.

A man in the rear of the Kia was not wearing a seat belt and suffered life-threatening injuries. He was taken to Inova Fairfax Hospital. A woman in the Kia’s front passenger seat was taken to a hospital with minor injuries.

The crash is still under investigation. Anyone with more information about the driver is asked to contact the Virginia State Police by calling 703-803-0026 or emailing questions@vsp.virginia.gov. 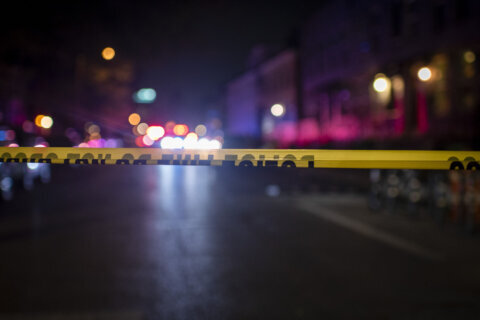