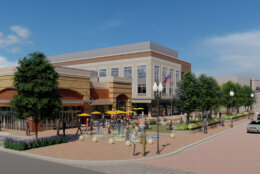 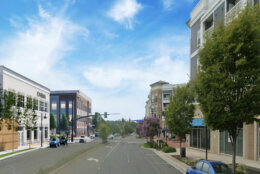 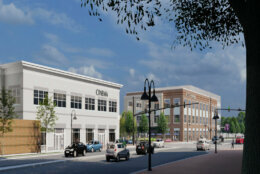 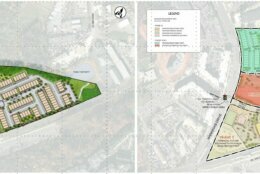 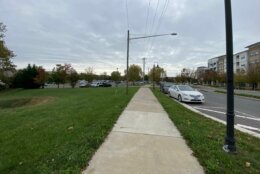 Many people know Manassas Park only as a stretch of congested Va. Route 28, bordered by the historic city of Manassas and Prince William County.

The independent city of Manassas Park, with a population of just over 14,000 people, last week entered an arrangement with a developer with the goal of creating and energizing a thriving downtown in what’s currently an underutilized area, with uninspiring amenities and aging infrastructure.

“It’s a very passionate small city there; the people who live there are very engaged, and they’re looking for something that’s going to help bring to life a place.”

The downtown area will include restaurants, a 42,000-square-foot movie theater, ground-level shops and a public plaza to serve as a gathering space for residents, employees and visitors.

The new development will be built along Manassas Drive, about a quarter-mile from the intersection of Route 28.

“You had an aging City Hall that was built in the 1980s and needed renovation. You had a VRE commuter surface parking lot on the other side of the tracks. And you’ve had a bunch of vacant land, that’s historically been light industrial use,” Rao said.

Until now, it’s been hard to define the character of the city.

“Manassas Park has been sort of bifurcated by the railroad tracks,” Rao said. “On one side, you had reasonably priced housing, apartments, townhomes, single-family homes — and on the other side of the tracks you’ve had this light industrial and strip retail, between the railroad tracks and Route 28.”

The project will provide 300 townhome condominiums — in what Rao calls ‘the missing middle’ of the housing market — accessible to D.C. and Amazon’s National Landing, by the adjacent Virginia Railway Express commuter station.

“The city ends up getting a new City Hall, a new library and a civic plaza, and it’s paid for out of the revenues from the new residential,” Rao said, in a lease revenue purchase agreement.

Manassas Park Mayor Jeanette Rishell said the city’s future financial strength will include a vibrant downtown: “The Village at Manassas Park completes our vision and provides a much-needed new City Hall and library at no cost to existing taxpayers.”

Although the city has long had plans for a new Virginia Railway Express station, a land swap aims to make the new station more user-friendly by enabling the construction of a pedestrian bridge to the rail platform, and will provide 544 parking spaces, as well as another 131 spaces to be dedicated to the city to accommodate visitors.

“Parking is everything when you’re looking at development projects, especially in Northern Virginia,” Rao said. “Being able to right-locate the garage in a location that an anchor tenant could take advantage of on nights and weekends, when it’s empty [of VRE commuters’ cars], was really something that brought this deal together.”

The developer and city is hoping amenities at The Village at Manassas Park will provide more than economic benefits: “Part of our strategy in working with the city was to create this large civic plaza, for large screen viewing, a splash pad for children to play — and the city will have the ability to shut down that square for festivals, and other things they’d like to do to bring the citizens together.”