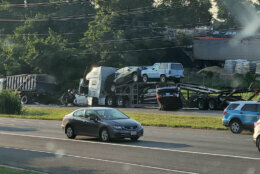 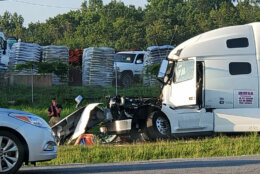 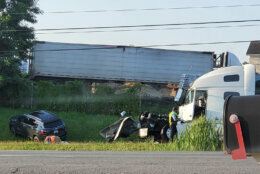 The incident happened in the northbound lanes of Lee Highway (Route 29) near the intersection of Somerset Crossing Drive shortly before 6:40 a.m., according to the WTOP Traffic Center.

Drivers were told to find an alternate route by Prince William County police.

*TRAFFIC ALERT: #Crash | #Gainesville;
Lee Hwy at Somerset Crossing Dr is currently closed due to a vehicle crash. Drivers in the area can expect delays and should find an alternate travel route. Use caution and follow police direction. pic.twitter.com/lixHoKomgg

As of 10:55 a.m, all northbound lanes on Lee Highway near the scene were open to traffic, following hours with police direction.

At least one automobile seems to have fallen from the car carrier involved in the crash.

There’s no word on any injuries or charges.

A map of the scene is below.