Virginia State Trooper Johnny Rush Bowman was stabbed 45 times by an unknown attacker on Aug. 19, 1984, after answering the door at his home in Manassas. Now, the FBI is offering a $50,000 reward for information that leads to the arrest of those responsible for his brutal murder.
Listen now to WTOP News WTOP.com | Alexa | Google Home | WTOP App | 103.5 FM
(1/4) 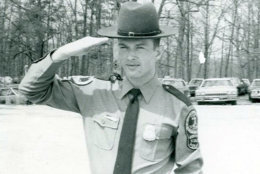 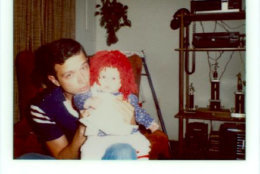 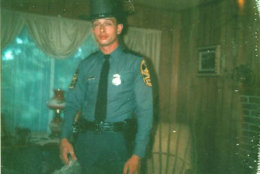 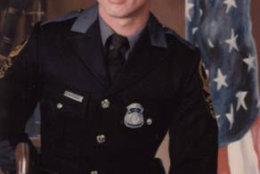 WASHINGTON — Virginia State Trooper Johnny Rush Bowman was stabbed 45 times by an unknown attacker on Aug. 19, 1984, after answering the door at his home in Manassas around 4:15 a.m.

Now, the FBI is offering a $50,000 reward for information that leads to the arrest of those responsible for his brutal murder.

The assault was so vicious that it woke up Bowman’s then-2-year-old daughter, Nikki, in their home. Bowman’s wife, brother and sister-in-law were also at the house when the attack happened.

According to accounts, Bowman was unarmed at the time, but he fought with the suspect or suspects.

Those responsible reportedly left behind sunglasses, a wig and a hard hat.

Bowman’s murder is the only unsolved killing of a Virginia State Trooper in the commonwealth’s history.

“For 34 years, Trooper Johnny Bowman’s daughter, parents, brother, friends and colleagues have had to endure his loss and not knowing who was responsible for taking his life,” Capt. Greg Kincaid, Virginia State Police Bureau of Criminal Investigation’s Fairfax Field Office, said in a news release.

“That’s why still today, the Virginia State Police and our partnering agencies remain determined to solve this homicide and bring Johnny’s killer to justice.”

“No one has forgotten Trooper Bowman — not his family, his friends, and certainly not law enforcement,” said Matthew J. DeSarno, Special Agent in Charge of the FBI Washington Field Office’s Criminal Division.

“The public is our best weapon in solving this cold case and we are hoping that with the passage of time, and through a significant reward of $50,000, someone with information, no matter how small or large, will come forward and help us bring closure to the family and justice to Trooper Bowman.”

Though decades have passed, Erin Sheridan, FBI Special Agent at the Washington Field Office, said that law enforcement officials haven’t neglected the case. “You just don’t forget, no matter how many years it has been,” she said.

Back then, Sheridan said there may have been evidence that wasn’t collected “because that was not the norm.” But, she said if Bowman’s killing had happened today, “it would be quite different. The crime scene and the analysis that would’ve been done after would’ve been very different today than it was back in 1984.”

Sheridan added, “But technology does get better and investigative tools become more available — then, we really can dig in and hopefully move the case forward.”

Nikki Bowman said that because her dad was in law enforcement and had military training, she found it strange that he had answered the door that early in the morning unarmed.

“It just seems very, very odd for me that someone with that training would answer the door at that time of day without some type of protection,” she said. As a police officer herself, Bowman said she would’ve either left the door unanswered or answered with protection.

That detail has led her to think that perhaps, the assailant or assailants may have been people who were already in the home, or her dad had answered the door for someone he knew.

In talking about her decision to become a police officer, Bowman said it was something that was meant to happen. “I was born to follow in his footsteps,” she said.

Her dad’s career “abruptly” ended, so, Bowman said, “I wanted to pick up where he left off.” She said she graduated the police academy at the same age her father was killed: 31 years old.

Bowman has looked into the case on her own, but mostly, she said, “I just try to spread the word and try to talk to as many people as I can who were around back then that may be able to provide me with some information”

“I need people to come forward, whether it’s a little detail or something large, any little bit of information will help us move forward at this point,” she said.

All tips can remain anonymous and the search for clues is nationwide.

A video of Nikki Bowman asking for the public’s assistance can be seen below.