5-year-old dies in chain-reaction I-66 crash 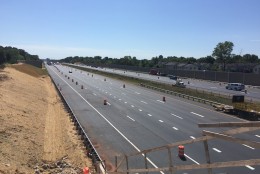 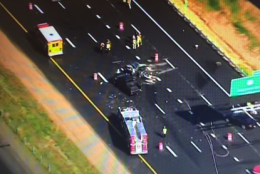 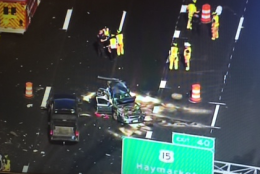 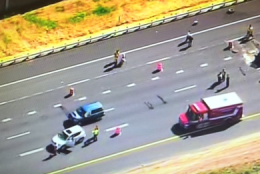 WASHINGTON — A 5-year-old died in a multiple-vehicle, chain-reaction crash on Interstate 66 in Prince William County Monday, which snarled traffic during the morning commute.

Around 9 a.m., traffic in the westbound lanes of I-66 near the 41-mile marker slowed in a work zone, and a 2012 Nissan Titan failed to brake in time and struck a 2005 Chevrolet Colbalt. The collision near Exit 43 between Gainesville and Haymarket prompted a chain-reaction crash involving a total of four vehicles, Virginia State Police said Monday.

Emergency crews transported the Chevrolet’s driver and a passenger — a D.C. couple — to Inova Fairfax Hospital for treatment of serious, but nonlife threatening injuries. The driver, 26-year-old Simone E. Rhodes, and the passenger, 34-year-old Gerald S. Mitchel, were wearing their seat belts at the time of the crash, police said.

The couple’s daughter, 5-year-old Nayla Mitchel, was in a booster seat in the back seat and died at the scene.

Drivers of two other vehicles were treated at the scene for minor injuries, said Virginia State Police.

Police are investigating the cause of the crash. The driver of the Nissan — 27-year-old Dustin Skidgel of Markham, Virginia — was charged with reckless driving. Skidgel wore a seat belt at the time of the crash.

The crash and its investigation closed all westbound lanes of I-66 in the area for several hours. All lanes reopened by about 1 p.m.

Police have not released information about the identity or age of the juvenile who died.