"I can't even tell you how hard it is to deal with something like this. I feel like I'm very violated, at this point, and very threatened," the 70-year-old Gainesville, Virginia resident says.
Listen now to WTOP News WTOP.com | Alexa | Google Home | WTOP App | 103.5 FM
(1/3) 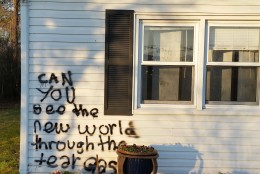 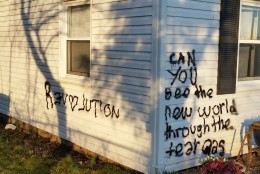 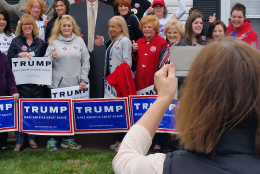 WASHINGTON — Someone has stolen the Donald Trump signs from her yard, spray-painted her house with messages and a motorcyclist stopped to threaten her life.

But a Gainesville, Virginia, woman says that while she’s frightened and exhausted by the ordeal, she won’t be intimidated. Judy Beaty, 70, has put up more Trump yard signs.

She says she’s been told by Virginia State Police that they will provide additional security measures.

“I can’t even tell you how hard it is to deal with something like this.  I feel like I’m very violated, at this point, and very threatened,” says Beaty.

She awoke Wednesday morning to find the Trump signs gone and her neat, white house spray painted with the words “revolution” and “can you see the new world through the tear gas.”

She says she would be less frightened if the incident stopped there, but the threats have continued.

“I get all these nut cases riding by here going, ‘Feel the Bern,’ ‘[Expletive] the Trump signs.’ I had one guy, yesterday, telling me I was going to die,” Beaty says.

Prince William County police say they had no additional calls about trouble at the woman’s home since the reported March 9 vandalism incident.

A group of Trump supporters showed up at her home on Sunday morning for a rally, and Beaty has been contacted by Del. Bob Marshall, R-13th District.

“Anybody would be frightened under these circumstances when you’ve got people driving by, making statements, issuing very lethal threats … somebody was shining their headlights into her house for about 20 minutes last night [Saturday night].”