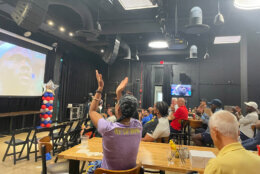 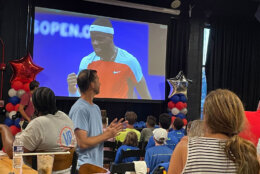 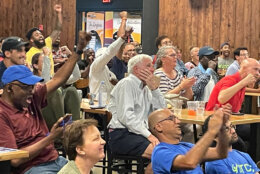 Dozens of Frances Tiafoe’s fans turned out in College Park to watch the Maryland-native play in the U.S. Open on Friday night.

While Tiafoe has fallen short on dreams of making it to the finals, fans are showing him lots of love.

The Junior Tennis Champions Center — where Tiafoe learned the game — sponsored the watch-party, which was held near campus.

“I know JTCC is proud of him, win or lose he did what he had to do,” Sydney Wright, a member of the organization said.

Komi Oliver Akli, one of his former coaches, said this is just the beginning for Tiafoe.

Tiafoe’s parents emigrated to the U.S. from Sierra Leone during its civil war in the 1990s. His mother worked two jobs. And his father helped build the JTCC.

Growing up, the Hyattsville-native would spent lots of time there.