A group of Bowie residents -- who have long fought the Prince George's County Council on zoning and land use issues -- showed up in Largo Wednesday for a news conference and protest over changes to master plans that govern future land use decisions in the Maryland city.
Listen now to WTOP News WTOP.com | Alexa | Google Home | WTOP App | 103.5 FM
(1/4) 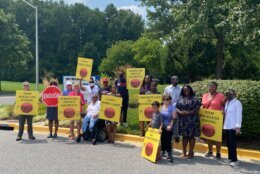 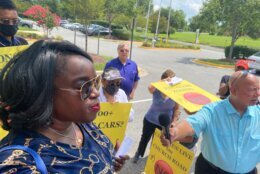 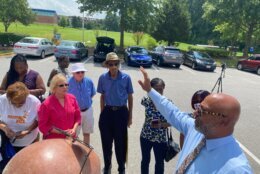 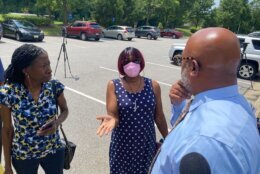 A group of Bowie residents — who have long fought the Prince George’s County Council on zoning and land use issues — showed up in Largo Wednesday for a news conference and protest over changes to master plans that govern future land use decisions in the Maryland city.

At the same time they were gathering, at-large Prince George’s County Council member Calvin Hawkins, who also chairs the council, was also pulling into the parking lot outside of the Wayne Curry Administration Building.

It didn’t take long for the residents to tell him their concerns.

Hawkins stayed, listened and engaged with the group, and by the end, he passed out his phone number and was working on setting up a meeting with them.

The residents, part of a group called Concerned Citizens of Prince George’s County District 4 and the Surrounding Areas, are particularly upset with changes made in March to a piece of land at the intersection of Maryland Routes 450 and 193.

The same group sued the county and won in the Maryland Court of Special Appeals in July, overturning a separate rezoning change by the council to allow more density at Freeway Airport, located more than 2 miles away from the intersection. However, residents argue that the council is trying to subvert them again with its most recent rezoning attempt.

“When you have two years of a plan that explicitly outlines what the future growth policies are going to be, what density is going to be, two years; and then in the span of seven days, you make a change that’s completely opposite to all of that two years of planning, that’s in the blink of an eye,” said Michael Bridges, who lives near the airport.

He said what made everything worse was that the rezoning changes were made only a week before the council voted despite having multiple public hearings on the topic.

He and others argued the high-density townhomes the council moved to rezone at the land parcels will overwhelm the roads and schools already overloaded by the current population. It was a similar explanation voiced by planning professionals involved in the process leading up to the council vote.

“That was completely undone with just the stroke of a pen and the blink of an eye,” Bridges said.

The residents pressed Hawkins on those changes.

“I’m not saying you’re incorrect. What I’m saying is I don’t have the information in front of me to refute or agree with you. So I’m going to agree that what you’re saying is accurate because what you said seems like it was right,” Hawkins said while handing out his personal cell phone number and asking the protesters to meet with him next week.

“I’m open,” Hawkins said. “If you all are saying the direction that you believe the council is going, I’m open to listen to you.”

Hawkins is up for reelection in November. He advanced in the July primary and is unopposed this fall.

The complaints of those gathered in the parking lot outside of the Wayne Curry Administration Building were similar to the concerns voters brought up to Hawkins when he campaigned in the spring and summer, he said.

Among those joining the demonstration was Wala Blegay, who won the District 6 primary last month and is among those taking office in December, along with other council members.

While the council is composed entirely of Democrats, members are divided into two factions that operate in different ways. Blegay has indicated that she will be working to move the council to act in a different manner.

“It’s a new day; it’s just that the new day can’t come fully until we’re sworn in,” Blegay said. “Please, I ask you all to give me a chance.”

Regarding zoning decisions, and the more controversial changes made earlier this year, she told residents that in the future, “We’re going to be supportive of following the plans that have already been laid out.” And if changes are made before the new council takes shape, she said the council would work to reverse them in the future.

“You need eight people [on the council] to do that,” Hawkins chimed in. But Blegay shot back that she would have the votes.

“I’m finding a lot of people in Prince George’s County are sick and tired of the same shuck and jive,” said Rhonda Billingsley, who was involved in the only recall to oust a Bowie City Council member in 2017.

Billingsley said she would also work to do the same to county leaders. “We’re going to keep close watch, and that’s a warning to all of the council members this time.”