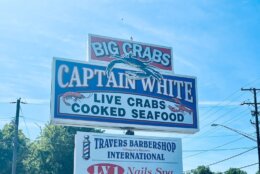 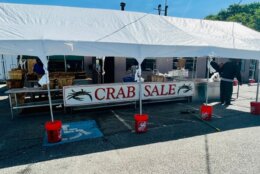 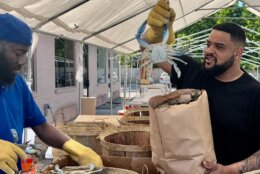 Captain White’s Seafood is now up and running at its new location in Maryland.

The iconic seafood spot left D.C.’s Southwest Waterfront in November after a long-running dispute with D.C.’s government and developers of The Wharf.

“It’s good because our clients have followed us,” said manager Douglas White. “We’re seeing a lot of old faces and some new faces, too.”

The business is now in Oxon Hill, Maryland, along Livingston Road. It is not fully open just yet, so in the meantime the business is selling a smaller selection of seafood under a tent outside of its building.

“Right now we have crabs, shrimp, crab meat and crab legs as well,” White said. “When we get inside our building we will have everything we had at The Wharf.”

White said the building, which is still under construction, should be ready by the end of the year.

Customer Jerome Kennedy used to go to D.C. for the seafood, but he had no problem following the business to Maryland.

“It’s the service, the quality of the crabs and the seafood all around,” Kennedy said. “With the new location, there’s plenty of parking now, so you can’t go wrong here.”

Captain White’s Seafood filed a complaint in 2015, accusing the D.C. government and Wharf developer Hoffman-Madison Waterfront of conspiring to run them out of business, in part by closing Water Street, the primary access road leading to the business.

The District and the developer admitted that Water Street was an access point but denied that they “entered into a conspiracy.”

In March 2021, a U.S. District judge ruled that Captain White’s leases were void.

“We like the new location in Prince George’s County, because they like us being here,” White said. “It’s nice feeling wanted, and it’s good to feel like a community. In D.C. they were giving us a lot of problems for being there.”