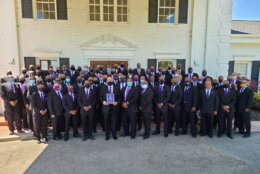 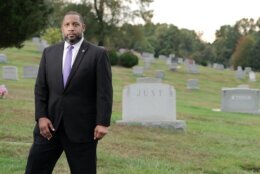 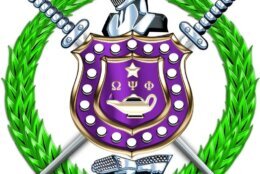 One hundred and ten years of brotherhood and service, that’s what the brothers of Omega Psi Phi Fraternity Incorporated celebrated last week during their founder’s day.

The fraternity was founded on the campus of Howard University in Washington, D.C. on Nov. 17, 1911.  A local chapter continued their legacy of service by being on the frontlines in the effort to feed needy families in Prince George’s County.

It’s been a weekly effort that began in March of 2020, the early days of the COVID-19 pandemic.

“I’m proud to be affiliated with men who practice uplifting our society on a regular basis,” Allison said.

He credited his frat Brother Donovan Benton with spearheading the effort to partner with Prince George’s county schools, churches and libraries to get the food distributed in all areas of the county.

“The need has been great throughout the county,” he said.

One of the goals they had was to go to every legislative district in the county. They would typically go out with four hundred boxes.

They discovered, Allison said, that “whether they were giving out boxes in the parking lot of St. Paul Church in District Heights or Croom High School in Cheltenham, Maryland the boxes disappear quickly.”

He lamented that, at the end of events, there are always cars that pull up and ask if they have any boxes left and they would have to turn them away.

Nearly two years later, many people have gone back to work, but he said, “many haven’t”, including people who haven’t returned to work because they don’t wanted to get the COVID vaccine.

Allison said there’s still much work to be done.

Allison is the father of two high schoolers who he said he’s raising to be “socially and politically conscious.”  He said he brings them to food packaging and distribution events so that they can get the service hours required by their school,

But more importantly, he said, “so they can see people’s faces when you put a box of food in their trunk. And how grateful they are.”

Allison insisted that he’s not necessarily steering them toward pledging Omega Psi Phi when the time comes, but whatever they choose in life, he said, “I do want them to live a life that contains some aspect of service.”

This is part of WTOP’s continuing coverage of people making a difference in our community authored by Stephanie Gaines-Bryant. Read more of that coverage.