An annual tradition to help thousands of Prince Georgians get what they need to put a Thanksgiving meal on the table took place Friday at FedEx field.
Listen now to WTOP News WTOP.com | Alexa | Google Home | WTOP App | 103.5 FM

An annual tradition to help thousands of Prince Georgians get what they need to put a Thanksgiving meal on the table took place Friday at FedEx field in Maryland.

From turkey to boxes full of everything needed for all the fixings, the Stuff-A-Truck Holiday Food Distribution event handed out enough food to feed 17,000 people.

Cars lined up early, and one by one they would pull up next to tables, where volunteers would load the food items into their trucks or back seats. Prince George’s County Executive Angela Alsobrooks was among the volunteers loading vehicles.

“Food insecurity is a real issue that continues even after COVID, and so we just want to make sure — especially during the holidays — that we’re able to get this food to all of our families,” Alsobrooks said.

Alsobrooks said the event will put food on the table for up to 2,500 families, which she said will give families enough food for at least a week. The county executive said the fact that the registration site had to be shut down earlier than expected showed how serious the need for a helping hand with food is.

“Even today, we were running, already, out of turkeys very early because we had such a great demand for this,” Alsobrooks said. 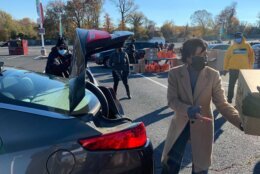 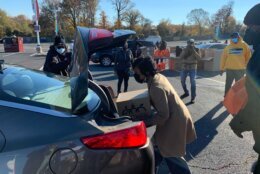 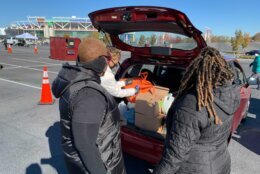 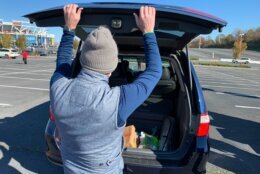 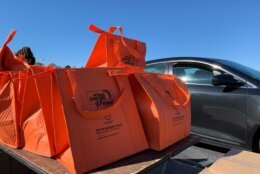 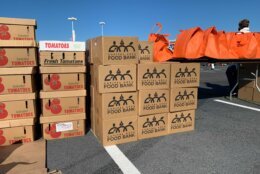 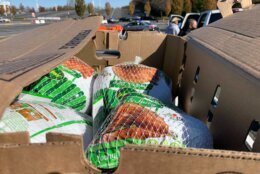 Dozens of volunteers, from county workers to community group members showed up to help hand out the food.

“It’s a wonderful feeling to be out here to help and assist those who are in need,” said Lady Sheila Ball, with the county’s chapter of the organization Top Ladies of Distinction.

Helping to load turkeys into the back of cars was Denise Ross, who works for the County Executive’s Office.

“It’s exciting; it’s a blessing for me to be able to help bless other people,” Ross said.

Among those picking up food is Ihsan Beezer, of Upper Marlboro, who said this act of generosity, by all those who made the event possible, gives his family something else to be thankful for.

“I just needed a little help during the holidays, so this is a great opportunity to help my family have more resources,” Beezer said.

Camille Bremnor, of Upper Marlboro, has depended on the event, and called it a privilege to be allowed to take part in it again.

“I’m a single mom, so it’s really going to take the sting off the grocery bill,” she said.

In addition to handing out 2,000 units of protein and 3,700 boxes of food and produce, the event also offered information on emergency rental assistance and COVID-19 vaccines to residents who took part.