As the ribbon was cut on the long-awaited University of Maryland Capital Region Medical Center in Prince George’s County on Tuesday, jubilant lawmakers hailed the state-of-the-art facility’s opening as a public health victory.

“More than a million people in Prince George’s County and Southern Maryland are finally going to get the health care that they deserve — which they so desperately need and that they have [needed] for so long,” Gov. Lawrence J. Hogan Jr. (R) said at the Tuesday ceremony.

The 11-story hospital, set to officially open Saturday, has one floor allocated solely to heart and vascular care, a maternity center and inpatient and outpatient behavioral health services. It replaces the more than 70-year-old Prince George’s Hospital Center in Cheverly.

The new 205-bed hospital was estimated to cost $543 million; Jones, in comments before the ribbon cutting, said the project came in under budget.

Alsobrooks said patients would be moved from Cheverly to the new facility at Largo Town Center over the weekend.

Brown, who had been a steward of the project since its inception, was touched by its completion.

“I can’t tell you how emotional today is, so I’m gonna stay on script so that I don’t get a little teary-eyed here,“ he said during the ribbon-cutting.

In an interview before the ceremony began, Brown, who had advocated for the project as lieutenant governor under former Gov. Martin O’Malley (D) said that he was prepared to be overwhelmed by the feeling of accomplishment.

Brown said that the project faced many challenges over the past 14 years, including reluctance on the part of former Prince George’s County Executive Jack B. Johnson (D) to relinquish county ownership of its hospital and an initial struggle to find an organization willing to take it over.

“Look, at first glance, it wasn’t attractive and [the University of Maryland Medical System] was not really enthusiastic about that. But with Martin O’Malley’s persistence and the power of the bully pulpit as governor, he said ‘We need you guys to take a close look at it,’” said Brown. “And when they opened up the hood and they kicked the tires they realized, ‘Hey there’s a real opportunity here to improve the quality of care in Prince George’s County,’ and the University of Maryland Medical System found a real opportunity.”

But Brown also made it clear during Tuesday’s ceremony that his commitment to standing up this facility was personal.

He told ceremony attendees that he and his wife moved to Prince George’s County 30 years ago, and that she became pregnant soon after.

During the ceremony, Hogan, a self-described “a life-long Marylander” whose father, Lawrence J. Hogan Sr., served not only in Congress but also as Prince George’s County executive, said that “addressing this need has been a personal and important mission” for him.

“That’s why I’m proud to have been a supporter of this project from day one,” Hogan said.

Brown, however, said Hogan did very little to move the project forward, adding that “all of the difficult work was negotiated under the O’Malley-Brown administration.”

“We got the rate-setting commission to agree to a rate increase to cover a third of the cost, we got the state of Maryland to commit to a third of the cost and … we got Prince George’s County to, essentially, do the same,” he said. “And that was all the hard work that was done to put this in motion.”

Brown said that there “was some doubt in the early days of the Hogan administration” about whether he would fulfill the state’s financial obligation, noting that the late Senate President Emeritus Thomas V. Mike Miller Jr. (D-Calvert) introduced a bill “to force him to spend the money.”

Miller successfully sponsored legislation in 2016 to require both the state and Prince George’s County to set aside hundreds of millions of dollars in funding from their respective capital budgets from fiscal year 2017 through 2021 for the new facility.

“[Hogan] neither helped nor really hindered the project, but this was set in motion and destined to be completed well before he took office,” Brown said.

Several lawmakers gave a hat tip to Miller on Tuesday for making the new facility a priority during his tenure.

Ferguson harkened back to his first legislative session in 2011, when he, a “wide-eyed, bright, bushy-tailed, ready-to-go” freshman lawmaker showed up at a Democratic Caucus meeting to discuss legislative priories.

“And our former Senate President at the time, President Emeritus Mike Miller said, ‘We’ve got one thing to do, one thing to do: We got to get this” — Ferguson paused for comedic relief, implying his predecessor used impolite language — “hospital in Prince George’s County done with.’”

“There are few things that public officials do during the course of their career where they can look back and say, ‘That was a big win for the people who I serve,’” Brown said during his interview. “We all have wins on behalf of the people we serve, but you only get a handful of big wins.” 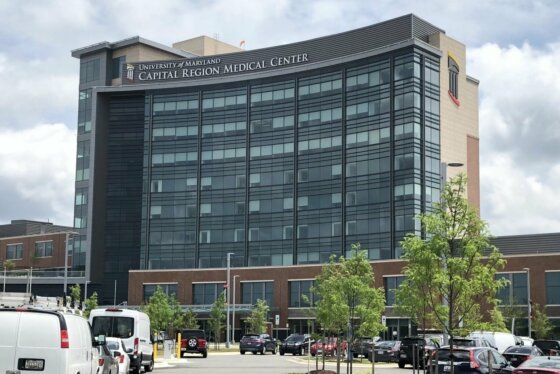