Last October, Tawanna Gaines was a powerful member of the Maryland House of Delegates. On Friday, she was sentenced to serve six months in prison on federal charges of misusing campaign donations.

The Prince George’s County Democrat faced a maximum of 20 years in prison; her plea agreement called for a sentence of between eight and 14 months.

Gaines, 67, of Berwyn, Maryland, had served in the House of Delegates since 2001, and was the vice chairwoman of the House Appropriations Committee and chairwoman of the Capital Budget Committee. She resigned last October, days after federal prosecutors opened a probe into her campaign finance records, and she pleaded guilty later that month to one count of wire fraud.

Prosecutors said Gaines had a PayPal account, not disclosed in campaign finance filings, into which she funneled more than $22,000 in campaign contributions for her personal use between January 2015 and April 2018, on items such as food, hair appointments, dental bills and a pool cover.

The expenditures happened more than 200 times over a three-year period, he said, and “there doesn’t appear to be a reason for it.”

Windham added that much of the spending happened when “Annapolis was burning” with other Democratic lawmakers from Prince George’s County going to prison on corruption charges. Windham said prosecutors wanted to make an example of her, as a deterrent for others.

He said the comparison to other corrupt politicians was inapt, since Gaines’ “vote was never for sale.”

He added, “She should have known better; she should have been careful accounting” for what was her money, and what was campaign money. He also said Gaines was the sole provider at home for her grandchildren, ages 6 and 4.

Gaines apologized in court to her family, the General Assembly and the people of Prince George’s County. She said she took her oath seriously, but still fell short; she thanked her supporters and said the episode was embarrassing, and hoped it wouldn’t put all of her other accomplishments in vain.

U.S. District Judge Theodore D. Chuang acknowledged that Gaines didn’t sell her vote and didn’t become wealthy from the fraud. But citizens “have a right to expect” integrity, he said, and agreed with the prosecution’s deterrence argument: Though Gaines no longer needs to be deterred, he said, “It is necessary to deter other public officials.”

Chuang added that “trust in government is very low, perhaps dangerously low” and that actions such as Gaines’ undermine faith in democracy.

Outside the courthouse, Gaines said the situation was down to confusion over a personal account and a credit card both attached to her PayPal account.

“I know who I am,” Gaines said. “And the people I represent know who I am. You can go anywhere in the state of Maryland, and I’ve made a difference. And I don’t want that to be lost.”

She apologized again to her family, the assembly and the people of the county. Of going to prison, she said, “I get to rest now.”

John Griffin, a former chief of staff for Gov. Martin O’Malley, spoke on Gaines’ behalf in court, and afterward said the former delegate “epitomizes all the best in public service.” He added that he respects “everything she’s done in public office, despite the mistakes she’s made.”

“Tawanna’s a very strong person,” Griffin said, “and with help from the many people who are her friends and who love her, she’ll make it through this.”

Peggy Higgins, a social worker who spoke in support of Gaines in court, said outside the courthouse afterward that Gaines was “a strong advocate for young children and families who needed mental health services.”

She called her “a woman of principle and integrity,” and called the sentencing “a sad day.”

Gaines’ daughter, 43-year-old Anitra Edmond, of New Carrollton, was the treasurer of the Friends of Tawanna P. Gaines campaign committee; she pleaded guilty in November to skimming more than $35,000 from the PayPal account between November 2012 and June 2018 for her own use. Edmond faces up to 20 years in prison and will be sentenced next month.

Asked about her daughter, Gaines said Friday, “My daughter won’t talk to me. So I pray for her every day.”

WTOP’s news partner Maryland Matters has reported that Gaines has been hit with 13 campaign violations and $2,160 in fines since 2006, based on state records.

WTOP’s John Domen and Jack Moore, Maryland Matters and The Associated Press contributed to this report. 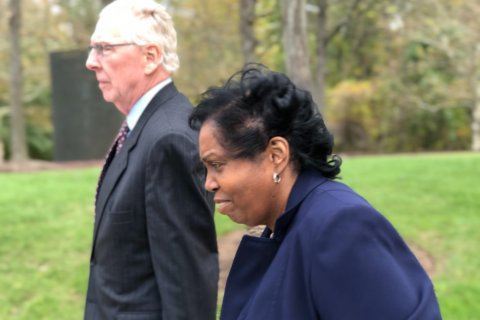