Everyone gets first-day jitters when faced with the return to school — everyone from the pre-K students learning the ins and outs of “crisscross applesauce” (aka that cue to sit cross-legged) to the fourth grade teachers scrambling to put the finishing touches on the welcome-back bulletin boards in their classrooms.

Even Maryland’s superintendent for schools, Karen Salmon, said the first-day nerves get to her.

“I always have trouble sleeping the night before. I have always had that issue, and I did as well last night,” she said while touring the halls of Montpelier Elementary School in Laurel.

The visit to the Prince George’s County school on the first day of classes in the county kicks off Salmon’s plans to tour all 24 school districts across the state.

The stop in Prince George’s is significant: In 2017, concerns about how graduation rates were being achieved triggered a state investigation. Kevin Maxwell, the school system’s CEO at the time, fiercely defended the school system’s practices but eventually left in a cloud of controversy.

The school district, one of the largest in Maryland, has been subjected to two state-ordered audits. Salmon said there’s been cooperation from school officials, who are being led by recently appointed CEO Monica Goldson. “They complied with all of the actions in the audit,” Salmon said, noting that the school system submits quarterly reports. “We’re still monitoring some things,” she said, but added, “We’re very satisfied with the progress here.”

Salmon toured several Prince George’s County schools after recently releasing the results of the statewide PARCC exams, which will no longer be administered in the state.

The state Department of Education is in the process of rewriting the exams. Salmon said it won’t mean a change in classroom instruction.

“People are not going to be teaching differently; it will just be a different test and a different way to measure the same standards,” she said.

As she toured the school with Goldson and Principal Carla Furlow, Salmon was shown features such as the school’s rain garden, and even the bird-safe windows, which feature stickers to prevent birds from colliding with the glass.

Salmon complimented the teachers along the tour for being able to open their classrooms on the first day of school, when establishing some routine is so important. “I always appreciate the teachers that allow us to come in,” she said, adding that “we try to be unobtrusive” even though a trail of reporters and camera crews followed in her wake.

Salmon told one teacher she’s been in education for four decades and still gets excited for that first day back.

“It’s really hard to lose that sense of what it feels like to be in that classroom,” she said. 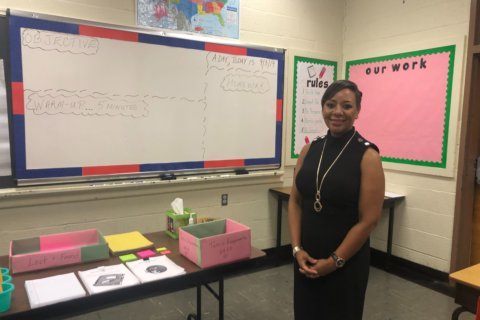