Coronavirus News: Fairfax Co. votes to increase substitute teacher pay | Is it time to get a COVID-19 booster? Which one? | Local cases of COVID-19 | How many in DC region are vaccinated?
Home » Prince George's County, MD News » Residents of Prince George's…

During a community meeting Wednesday, neighbors peppered a property developer and a realty executive with questions about proposed plans to build a giant logistics and product center in their community.
Listen now to WTOP News WTOP.com | Alexa | Google Home | WTOP App | 103.5 FM
(1/4) 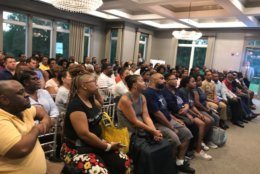 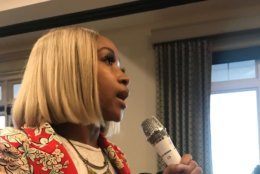 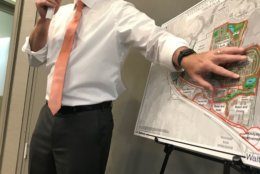 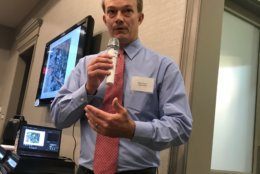 Anxious residents of the Westphalia Community Center — a young community in Prince George’s County, Maryland — filled every seat in the grand room of the club house at Lake Presidential Golf Club Tuesday night.

During the community meeting, neighbors peppered a property developer and a realty executive with questions about proposed plans to build a giant logistics and product center in their community.

The proposed facility and grounds, which would occupy roughly 80 acres, is presumed by locals to be an Amazon facility. But the realty executive and developer explained that, because no lease agreement has been signed yet, the identity of their potential neighbor must remain private.

Many in the newly-built neighborhoods of pricey single-family homes and town homes have been hoping that retail shops, including a grocery store, would pop up first in the Westphalia Town Center along Maryland Route 4 Pennsylvania Avenue, near Old Marlboro Pike in Prince George’s County.

“It’s kind of disturbing … everybody thought that they were getting retail … there’s people who invested years before we did that are still waiting for just a grocery store … and now they’re going to have a big warehouse that they’re going to have to look at from their property,” said Jerry Porter who has lived with his wife in Westphalia since April.

“Amazon owns Whole Foods … if Amazon is desiring to come into our neighborhood, why not give us that Whole Foods,” said Anwar Golladay, a Westphalia resident.

The plans submitted to the county planning board call for a five-story fulfillment and distribution center, 1,794 parking spaces, 267 loading spaces — 64 with docks — plus a water tank and two guardhouses, The Washington Business Journal reports.

“We’ve got lots of retail — grocery store, coffee shops, restaurants — that will go in here,” said Ed Fleming, president of the east region for Walton Development and Management. Fleming pointed to a large drawing of the property plan for the town center.

“Retail is going to be along Pennsylvania Avenue and the sliver between Pennsylvania and Presidential (Parkway),” he said.

Some residents are worried the proposed sprawling facility could damage their home values.

“What are you all doing to our property values?” asked Gabrielle Brown, a Westphalia resident.

“I want to make sure that I’m not going to do something that’s going to decrease property values,” said Fleming. “Right now we have about 470 acres. We are selling approximately 80 acres. So just like you own property adjacent to this (proposed) facility, I own property right next to the facility,” he said.