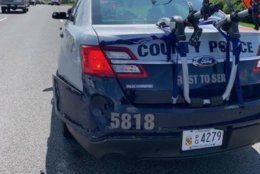 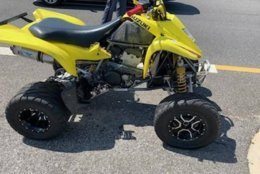 Share on Facebook. Share on Twitter. Share via email. Print.
About a dozen illegal ATV and dirt bike riders popped wheelies, rode on sidewalks and rattled the nerves of drivers and pedestrians at National Harbor in Prince George’s County, Maryland, Sunday afternoon.

Prince George’s County police assigned to the waterfront development said the band of riders surrounded police vehicles, revved their engines and drove recklessly. But the carelessness of one rider led to a crash and his arrest.

Police said when an officer slowed his cruiser, Marlon Escobar-Lopez, 23, of Fort Washington, Maryland, popped a wheelie behind the cruiser and then crashed into the rear of the marked police vehicle.

Escobar-Lopez was thrown from his ATV and injured, but he tried to run away before he was quickly caught.

Police said he was taken to the hospital with non-life threatening injuries.

Often police resist chasing the fast-accelerating illegal dirt bikes and ATV’s to preserve public safety. But with Escobar-Lopez in custody, police have charged him with 20 different counts including disorderly conduct, negligent driving, reckless driving and driving without a license.

Following the arrest, police said the other riders fled the scene driving on the wrong side of the road as they exited National Harbor.