Two people were shot, two others stabbed and dozens of families were forced from their homes by an apartment fire raging in the Landover area on the same night.
Listen now to WTOP News WTOP.com | Alexa | Google Home | WTOP App | 103.5 FM
(1/5) 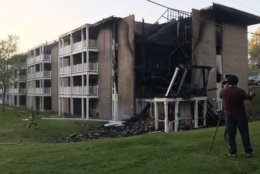 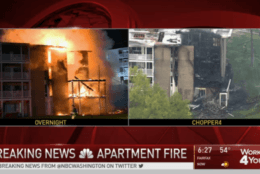 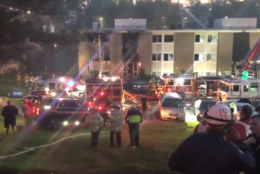 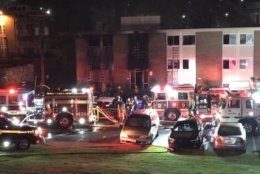 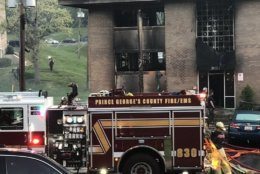 Law enforcement and fire officials were busy in Prince George’s County, Maryland, where a large fire, double shooting and double stabbing all occurred within miles of each other from Monday night into Tuesday morning.

Two people were shot, two others stabbed and dozens of families were forced from their homes by an apartment fire raging in the Landover area on the same night.

Footage broadcast by WTOP’s news partners at NBC Washington showed fire engulfing multiple units on a northern corner of the building. The fire broke out around 3:30 a.m., and was declared extinguished one hour later.

A third floor resident told WTOP’s Melissa Howell he woke up to thick smoke in his apartment, and had to scale down from the balcony with his wife and child after the fire overwhelmed the stairwell.

“The fire is coming, if we stay, we’ll die,” he recalled telling his wife, clutching his 9-month-old baby as neighbors attempted to help from below.

Twenty-six occupants were accounted for, Brady said, including a family of four previously feared missing. “PGFD is confident all occupants escaped the blaze safely,” the agency tweeted.

Though an investigation was ongoing Tuesday morning into the cause of the fire, Brady said a door left open in the apartment where it began may have contributed to its rapid spread by allowing smoke and flames to spread up the interior stairwell.

With the stairwell inaccessible, residents of upper floors had no choice but to find other escape routes.

“They retreated to their balconies and either jumped, or got down somehow to safety outside,” Brady said.

Three firefighters were transported to an area hospital with minor burns. One resident was also taken to be treated for smoke inhalation.

Four people were injured across two incidents only minutes apart in Landover on Monday evening.

Minutes later, two others were stabbed only a few miles away in the Woodlawn neighborhood of Landover Hills.

It remained unclear how serious the four injuries were.

Below is a map of all three incidents: