A massive fire chewed through a Lanham, Maryland, apartment complex Monday, doing $2.2 million worth of damage. The cause remains unknown. More than 100 people are expected to be displaced.
(1/7) 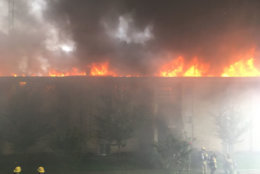 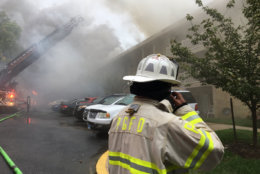 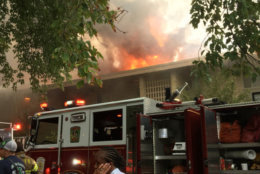 WASHINGTON — A massive fire chewed through a Lanham, Maryland, apartment complex Monday, doing $2.2 million worth of damage. The cause remains unknown.

An estimated 132 residents are expected to be displaced.

Just before 4 p.m., Prince George’s County Fire and EMS spokesman Mark Brady tweeted about a fire in the 5300 block of 85th Avenue in Lanham. The apartment complex there had flames leaping from the roof and thick smoke billowing into the sky.

“It burned intensely,” Brady told WTOP. “That fire just extended down that roof line with some drop down fire onto the top-floor apartments.”

Initially, it was a two-alarm fire but Brady then tweeted that it was a three-alarm fire. The roof sustained heavy damage with part of it collapsing.

Video Update 3 85th Avenue. Looking at 75 to 100 displaced after fire is out. #PGFD pic.twitter.com/WcAa4DkbLq

“Initially, we had enough water going in, but as more firefighters hooked up their lines and started flowing water, we started to lose water pressure and the fire got ahead of us,” he said.

Just after 6 p.m., Brady tweeted that the fire was out except for some smoldering hot spots that firefighters worked to extinguish.

Brady said that though the rain did little to help fight the fire, the moisture may have helped prevent some fires from being set in the nearby trees.

No injuries were reported. The cause of the fire is still under investigation, Brady said.

Firefighters from Montgomery County also helped at the scene.