Main Street between Pratt Street and Water Street will remain closed indefinitely as crews pick up after the early morning blaze.

The Prince George’s County Fire Department said approximately 100 firefighters responded to the three-story building at 14707 Main St. The fire broke out around 1:30 a.m. and burned for over an hour.

Around 1:30 am Building Fire in 14700 block of Main Street in downtown Upper Marlboro. 2-story commercial building that includes a resteraunt. Fire showing on arrival. Went to 3-Alarms. Appx 100 Firefighters. Fire out at about 3am. Video by PGFD Fire Chief @BenBmbarksdale pic.twitter.com/UwvBzrhrFh

The building houses both local business and apartments, including Al’s Deli, where officials believe the fire began. Photos from the scene show the storefront to have been severely gutted.

#UpperMarlboro: crews are breaking down, but still locking in on hotspots. Al’s Country Kitchen appears to be where the fire began before spreading to several businesses & apartments. Fire investigators are on scene. pic.twitter.com/862CJESJBA

All three floors were affected by the fire, and three of the building’s occupants have been displaced and will be assisted by the Prince George’s County Office of Emergency Management and the regional American Red Cross.

No injuries were reported. One firefighter was treated on scene for heat exhaustion, but did not require hospitalization, Brady said.

Investigators are still trying to determine the cause of the fire. 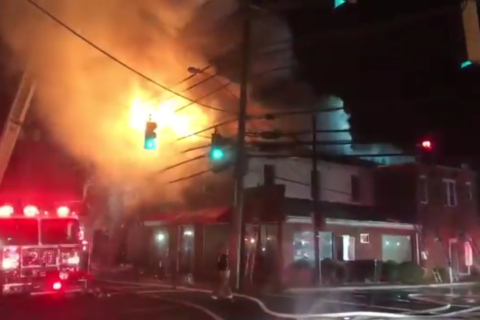