The audit will include a review of the class’ graduation records and interviews with school leaders and staff, said Maryland's state superintendent of schools.
Listen now to WTOP News WTOP.com | Alexa | Google Home | WTOP App | 103.5 FM

WASHINGTON — Investigators are going to take an even closer look at a school system that’s been accused of changing grades and more in order to allow students to graduate.

Last fall, an independent audit found that one in four Prince George’s County high school graduates in 2016 and 2017 may not have met graduation requirements.

Now, the Maryland State Board of Education plans a lengthier follow-up audit that will look at the Class of 2018.

“In short, we looked backwards. Now we want to look to the current and to the future,” Board President Andy Smarick said at its meeting Tuesday. The new independent audit, he added, will “make sure this next wave of graduates happening this year and into the future have all of the necessary requirements met.”

The audit will include a review of the Class of 2018’s graduation records and interviews with school leaders and staff, said Karen Salmon, Maryland state superintendent of schools. It could take about six months to complete.

Salmon also plans to put a member of her staff in the county in a monitoring role.

“Yes, this whole process has been discouraging — the things that we learned the first time around — but I’m pretty optimistic about this,” Smarick said. “And it’ll help not just Prince George’s County but also hopefully the rest of the state as we think about high school graduation requirements and monitoring.”

Prince George’s County schools CEO Kevin Maxwell is in the process of stepping down following the charges of grade manipulation and criticism over staff member raises.

D.C. Public Schools is also dealing with a graduation scandal. A study commissioned by the school system found that more than one in three students who graduated from high schools last year got help due to policy violations. 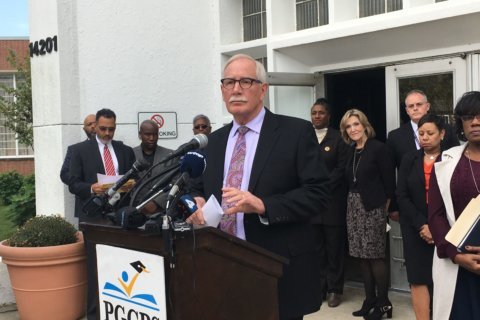 Md. driver who stopped to remove something from the road struck and killed