Nik Wallenda walked a wire 75 feet up and the width of a nickel at National Harbor Wednesday. He is done higher walks, he said, but above a certain height the danger is the same. See video.
Listen now to WTOP News WTOP.com | Alexa | Google Home | WTOP App | 103.5 FM

NATIONAL HARBOR, Md. — A daredevil known around the world for his thrilling high-wire walks took his act to Maryland’s National Harbor Wednesday, crossing between two buildings on a cable only as wide as a nickel.

“I’m risking my life,” Nik Wallenda said as he talked about his routine.

During Wallenda’s walk, which lasted roughly 10 minutes, he took a knee, moved backward, waved to the crowd and even feigned a little slip at the end.

He was 75 feet in the air with no tether, harness or safety net.

Adams watched from the eighth floor of the hotel with a group of people who recorded the event with their phones.

“It made me nervous to see him doing it,” said Adams. “I can’t believe he didn’t have a net.”

Using a balance bar, Wallenda walked 230 feet under cloudy skies with the Capital Wheel and the Potomac River in the background. 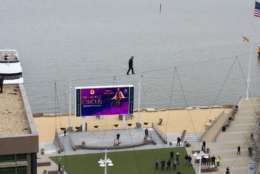 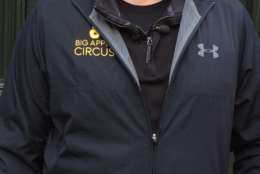 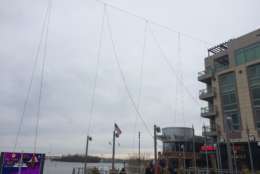 “The weather was just perfect,” said Wallenda, who added that he was “pleasantly surprised at how stable the cable was.”

The crowd below cheered him on.

“I’ve only gotten to see something like this in movies,” said Anna Morataya.

Although he has a lot of experience on the wire, Wallenda does not like to ponder previous stunts.

“I try not to compare the walks,” he said. “I respect them all the same. The truth is: if I slip, I lose my life. If you become complacent, it becomes deadly, so I try never to become complacent.”

In 2012, Wallenda walked 1,800 feet across Niagara Falls in swirling winds and misty conditions. A year later, he did a Grand Canyon walk near Grand Canyon National Park in Arizona.

Wallenda will be at National Harbor with the Big Apple Circus, which runs from March 8 to April 1.