WASHINGTON — A Laurel, Maryland, man has been arrested Monday in connection to a stabbing last week on the Intercounty Connector, police said.

The stabbing happened Oct. 18 during rush hour traffic on the ramp from the ICC (Maryland Route 200) to northbound Interstate 95, Maryland State Police said. The victim was a passenger in a Chevy Silverado, traveling home from work with a co-worker who was driving. Their truck moved to block the path of a Ford pickup truck that was starting to pass stopped traffic on the right shoulder, according to state police.

The driver of the Ford, 49-year-old Ronald Paul, got out of his truck to confront those in the Chevy, state police said. Paul demanded the victim, who was sitting in the passenger seat with the window down, get out of the vehicle. When the victim refused, Paul opened the door and attempted to grab the victim. The victim tried to defend himself, turning his legs toward Paul, who then stabbed the victim in the leg with a knife.

The driver called police, and Paul reportedly spit toward the driver before leaving. The victim was later taken to a hospital by ambulance. He is a man from Reisterstown, Maryland, but is not being identified at this time, state police said.

The victim and driver were able to get a part of Paul’s Maryland license plate and a description of him and his vehicle. Paul was arrested 7:30 p.m. Monday at a residence, state police said.

He is facing multiple charges, including attempted second-degree murder, first- and second-degree assault, reckless endangerment and other charges. Paul is currently being held without bond. 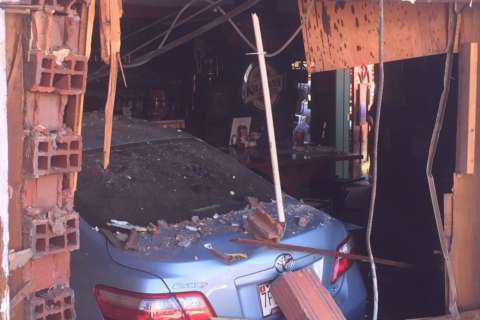