Bowie State, U.Md. to honor Army lieutenant who was killed in May

The two schools will conduct a moment of silence Wednesday at 12:05 p.m. to honor the life of Lt. Richard Collins III, the Bowie State student who was stabbed to death on the College Park campus on May 20.
Listen now to WTOP News WTOP.com | Alexa | Google Home | WTOP App | 103.5 FM

WASHINGTON — Before the new school year gets into full swing, there will be a solemn moment of remembrance at Bowie State University and the University of Maryland, College Park.

The two schools will conduct a moment of silence Wednesday at 12:05 p.m. to honor the life of Lt. Richard Collins III, the black Bowie State student stabbed to death on the College Park campus on May 20.

The chapel bell will ring at the College Park campus signaling the start of the moment of reflection. A siren will sound at 12:04 p.m. on the campus of Bowie State reminding students, faculty and staff to pause.

“This is an opportunity for us to take a step back, reflect and try to understand how we move forward,” said Dr. Artie Travis, vice president of student affairs at Bowie State. “There’s no understanding why what happened to Lt. Collins occurred.”

Collins was killed just days after he was commissioned a second lieutenant in the Army and just a few days before he was to graduate.

“The moment of reflection is to honor his life and reflect on the way that life was taken by somebody who was a student on our own campus,” said professor Roger Worthington, chief diversity officer at the University of Maryland.

Former Maryland student Sean Urbanski, who is white, has been charged with the murder. Police say he belonged to a racist Facebook group.

Chaplains of different faiths will offer prayers and lay flowers at the College Park campus. And work in classrooms, labs and offices will momentarily pause to honor Collins’ life, school leaders said.

In a letter to the University of Maryland community, President Wallace Loh alluded to the recent protests in Charlottesville, Virginia, saying “there’s been a resurgence of white supremacists and neo-Nazis.”

The moment of silence, Loh said, is a time to “redouble our efforts to respond, recover and heal.”

“We’ll use this as a conversation starter to increase awareness and decrease intolerance,” said Travis. 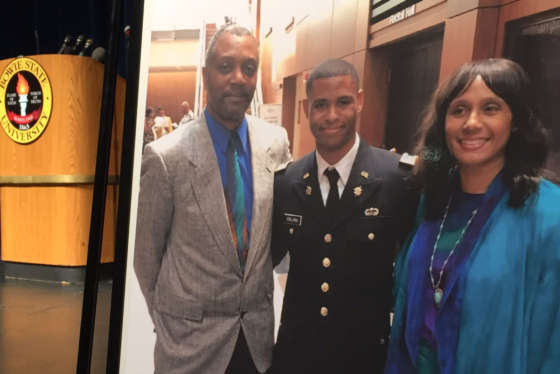 “Celebrate his life, but celebrate it in a manner particular to Richard,” a Bowie State University professor said at a Monday night vigil for Richard Collins III, who was stabbed to death over the weekend.