It's the story of the striking image of the graduation gown of a murdered Bowie State University student, and how it's affected those who have seen it. It's one of the most enduring memories of a heartbreaking story imbued with commitment, excellence, violence and hate.
Listen now to WTOP News WTOP.com | Alexa | Google Home | WTOP App | 103.5 FM

WASHINGTON – The symbolism was simple, thoughtful, painful and helpful.

The image of the graduation gown of 2nd Lt. Richard Collins III, draped over a front row chair during Bowie State University’s Tuesday’s commencement ceremony, three days after his murder, will likely be one of the most enduring memories of a heartbreaking story imbued with commitment, excellence, violence and hate.
Live coverage: Bowie State student remembered at funeral 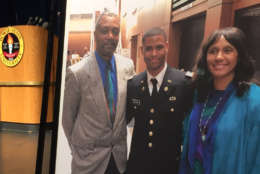 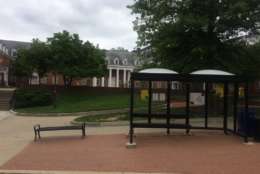 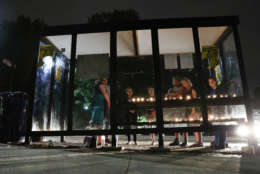 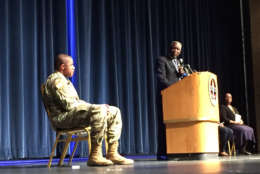 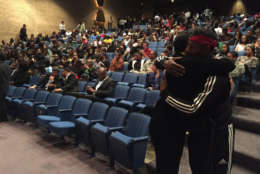 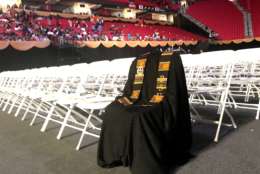 University police chief David Mitchell said Urbanski was a member of a white supremacist Facebook group, and the FBI is investigating whether Collins’ murder should be classified as a hate crime.

A photo of the gown on a white folding chair, taken on an iPhone 7, as the Xfinity Center began to fill up for the ceremony, has been seen on Twitter by almost 11 million people and has drawn reactions ranging from despair to furor and from sympathy to thanks.

Do not forget this. Ever. https://t.co/EZenx8txcI

Several people expressed gratitude to the university for its quiet tribute to Collins.

The idea for placing a gown in a seat of honor came from university administrators, as they discussed how they would recognize the loss of the graduating senior, who days earlier had been commissioned as a 2nd Lieutenant in the U.S. Army.

“It was a symbolic way to represent that loss,” university spokesperson Cassandra Robinson told WTOP.

Robinson said the university provided the gown to create the recognition.

“The fact he was killed on the brink of a positive milestone in his life, combined with the tragedy of his death occurring in an unprovoked manner had already resonated with people around the world,” Robinson said. “Because so many people were already feeling that tragedy, the draped chair became a visual manifestation of the magnitude of the loss.”

@AugensteinWTOP This photo is so powerful…so heartbreaking…I have cried every time I look at it.

Yet, some people felt the tweet was lacking some important information.

@AugensteinWTOP You forgot to say “by a white supremacist”

@AugensteinWTOP How come you didn’t mention the white supremacist part??????????????

Here’s the reason why. Actually, a couple of reasons:

First, Sean Urbanski has not been charged with a hate crime. Even though he may be in a white supremacist group, investigators would have to determine if Richard Collins was stabbed because he was African American. While social media permits those sorts of leaps, the ethics of journalism do not.

Second, this event was to honor the hard work of Bowie State University students and their missing classmate. I wanted the photo and tweet to celebrate them. The story I wrote about the graduation didn’t mention Collins’ alleged killer by name.

With only 140 characters, it’s difficult to tell a whole story in a single tweet. Sometimes a tweet captures a single moment.

Over time, and as the case against Sean Urbanski develops, there will be plenty of time to focus on motive.

By its nature, social media moments are generally here, then quickly gone. And forgotten.

In this case, the life’s commitment, success and promise of a young student, officer and man was here, then quickly gone too.