WASHINGTON — The Bowie, Maryland, man accused of killing his stepfather and posting pictures of his body on social media, previously pleaded guilty to second-degree murder charges for a 2004 killing and has an extensive criminal history, according to online court records and the Prince George’s County State’s Attorney’s Office.

Beverly is being held without bond.

“This is someone who, not only by this action, but by an extensive criminal history, has shown himself to be a danger to the community,” said John Erzen, communications director for the Prince George’s County State’s Attorney’s Office. “And there is no reason whatsoever he should be walking our streets.”

During a bizarre outburst after a brief court appearance Monday afternoon, Beverly began shouting about being hit by a satellite and yelling that nobody answers to the law but him, Erzen told WTOP.

Beverly was sentenced to six years in prison on the 2004 second-degree murder charge, Erzen said. The case predates the current administration of the State’s Attorney’s office, and Erzen said he was still working on tracking down court documents about that case.

Beverly also has a history of domestic disputes involving Pinkney, who had filed a protective order against Beverly Feb. 7, according to the Prince George’s County Sheriff’s Office.

Later that month, Beverly was charged with second-degree assault after Pinkney filed a complaint with the Prince George’s County District Court Commissioner stemming from a physical altercation, Erzen said. However, a warrant on those charges was not actually served by the sheriff’s department until Beverly was taken into custody over the weekend, Erzen said.

Col. Darrin Palmer, with the county sheriff’s office, said officers made three attempts to serve both the protective order and the warrant but were not successful. The protective order requiring Beverly to stay away from his stepfather’s residence was ultimately served by Bowie City police on Feb. 22, Palmer said.

As recently as two months ago, Bowie City police had responded to a call about an altercation between Beverly and Pinkney, authorities said. In that case, police said Beverly had Pinkney in a choke hold until a witness intervened.

Photos of a man presumed to be Beverly lying next to his stepfather’s dead body were seen on Twitter early Saturday and have since been removed from the social media site.

“This is something that’s shocking to all of us, when you see someone who did what the defendant in this case allegedly did: Killing his stepfather and then allegedly taking photos of the victim and posting them to his social media accounts,” Erzen said. “Shocking just doesn’t even begin to describe what it is.”

Authorities In Prince George’s County were alerted to Pinkney’s killing Saturday morning when a caller told 911 operators that her son had killed her husband, according to police documents.

Police responded to 15100 Dalby Court at about 8 a.m., where they discovered Pinkney’s body with trauma to the upper body. Prince George’s County police said Monday the cause of death was asphyxiation.

After police spotted Beverly in a car near Hampton Mall Shopping Center, police began a chase that led from Capitol Heights, Maryland, back to Bowie. The chase ended near the 1000 block of Dodson Court when police caught Beverly, who got out of the car and ran, according Prince George’s County police.

A neighbor told WTOP about an apparent pattern of domestic disputes between Beverly and Pinkney that resulted in police being called.

“I heard months ago that the son — the stepson, I’m gathering — pulled a gun out on [Pinkney],” said Rhonda Billingsly. “And I said I couldn’t believe it, because Ron isn’t that kind of a person, that you would pull a gun out on him.”

Beverly’s preliminary hearing is set for Oct. 2 in Upper Marlboro.

WTOP’s Mike Murillo and Kristi King contributed to this report. 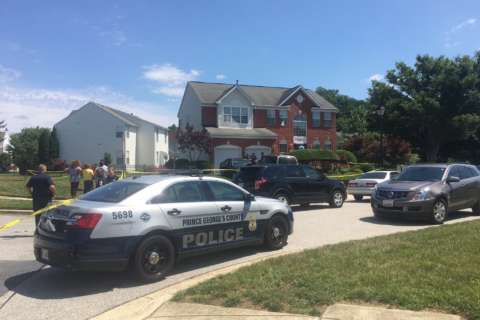