Neighbors band together to save trees from Pepco’s saws 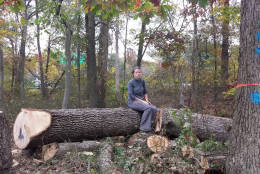 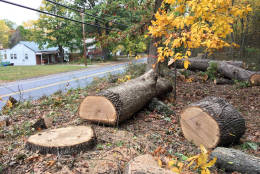 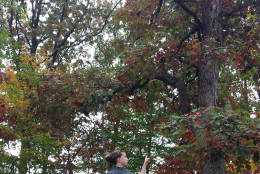 BERWYN HEIGHTS, Md. — Pepco’s ongoing efforts to improve the reliability of its electric grid often involves removing trees that sit too close to power lines — regardless if neighbors are happy with the end result.

“It seems like they’re arbitrarily just taking down trees,” said Agnieszka Traynor, a resident of Berwyn Heights, Maryland, of tree work underway between Edmonston Road and Route 201 just inside the Capital Beltway. “It leaves us very exposed to have the trees all come down.”

Multiple arborists are involved in tree removal decisions, Pepco Vice President Jerry Pasternak said while discussing the protocol for removing trees from the public right of way such as along Edmonston Road between Pontiac and Seminole streets.

“We meet on site with the arborist from the right of way owner — whether it’s the state or the county or the municipality, and those two arborists have to agree on the removal of a tree,” Pasternak said. “If there’s an agreement on that, we then go to the state Department of Natural Resources for them to review. And they need to concur as well in the removal of a tree.”

Factors influencing whether a tree is trimmed or removed include the species of the tree, its current size and the tree’s growth rate. Pepco is required to trim and or remove trees to allow power line clearance and accommodate at least four years of growth.

When Pepco determines trees need to be felled, it offers replacement trees that won’t grow tall enough to potentially interfere with power lines.

“We have a policy called ‘right tree, right place.’ And there are dozens of species we recommend to be planted under or next to utility lines,” Pasternak said. “We will work with the tree owner to replace the tree with an appropriate species.”

The strip of land in question in Berwyn Heights is owned by the Maryland State Highway Administration, which has the final say on any replanting.

“I’m not sure how they’re going to plant the 200 (replacement) trees into this mess,” said Therese Forbes, who has lived in Berwyn Heights for 24 years. “With all of the stumps they’re leaving behind and the root systems, how are those (new) trees actually going to survive?”

The removal of trees along Edmonston Road thins the barrier between homes and busy Route 201. And that concerns some residents who believe increased visibility and access could lead to opportunistic crime.

“We’re not just concerned about power outages,” said resident Carolyn Muscar. “There are so many other factors of crime, pollution, water drainage and wildlife.”

Some residents, who were surprised when tree-trimming trucks showed up across the street, complain about what they call a lack of transparency.

“It was very difficult for residents to find out what was going on,” said neighbor Amanda Dewey. “And because it’s so important for property values, for safety, for our ecosystem, I think … stronger communication would be very important here.”

Residents have shared their concerns with Pepco directly.

In a letter sent to some of the concerned residents, Pasternak said, in part:

“Our top priority is safety. Trees that come in contact with energized conductors can themselves become energized, thereby endangering the public. In addition, there are service reliability concerns. We are currently executing the most comprehensive reliability plan in our history, and a major component of that effort is vegetation management.”