Firefighters think Md. brush fire could have been started by meteorite; NASA not sold

Firefighters haven’t confirmed the cause yet, but when they finally got the fire out, they found a crater with a rock at the bottom.
Listen now to WTOP News WTOP.com | Alexa | Google Home | WTOP App | 103.5 FM
(1/2) 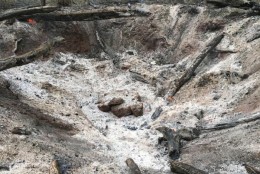 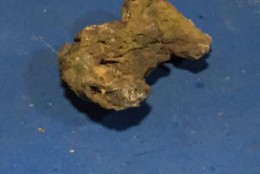 WASHINGTON — A big brush fire in Bowie, Maryland, took several hours to put out, and while firefighters thought that might have been because it was started by a meteorite, scientists make a convincing case the cause was more earthly.

The fire started Sunday evening between 5 p.m. and 6 p.m. in a wooded area near Scarlett Oaks Terrace, the Bowie Volunteer Fire Department said.

Firefighters haven’t confirmed the cause yet, but when they finally got the fire out, they found a crater with a rock at the bottom.

They think flames from the rock ignited the trees and bushes in the area. They left the rock there.

NASA, however, isn’t buying it.

Meteorites “on a small scale do not start fires,” Kelley said. “They’re not hot enough when they reach the ground.”

They heat up when they enter the atmosphere, but Kelley says that only the outer millimeter or so heats up. By the time a meteorite hits the ground, it’s nowhere near hot enough to cause a fire.

As for the crater, Kelley said it looks like a pit dug in the woods, or maybe an embankment, but it’s not a meteorite impact crater, which he described as “something that looks like it would have popped out of the ground, like a splash.”

He added that even though there’s a rock at the bottom of the hole, that’s not particularly unusual.

“Yes, there’s a rock at the bottom, but if you dig down four feet to the left, will you see another rock?”

But the bottom line is, a meteorite wouldn’t cause a fire unless it was massive, Kelley said.

The Tunguska event, a blast more powerful than the first atomic bomb and thought to have been started by a meteorite, didn’t start a fire, though it knocked down an estimated 80,000 trees. The KT impactor, said to have led to the extinction of the dinosaurs, may have started a fire, Kelley said, but it measured miles across.

“If something on that scale occurred in Maryland, we wouldn’t be having this conversation,” Kelley said.