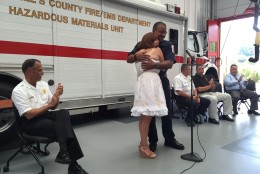 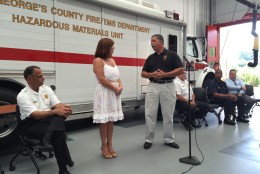 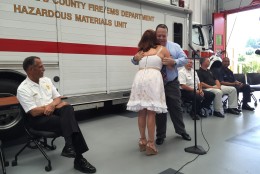 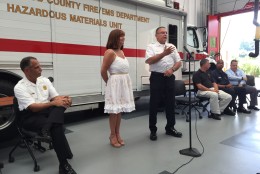 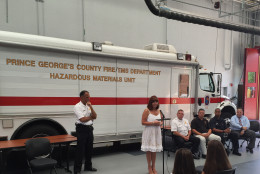 The car was  crushed and two of the teens were killed–leaving Lisa Beavers Hegewisch as the sole survivor.

Nearly 30 years later at a Bowie fire station, Hegewisch was able to reunite with four responders who helped save her life.

“The fact that I have this opportunity today is beyond what I could ever imagine,” Hegewisch said.

The reunion came about after Hegewisch, a yoga trainer, was asked to lead a class at a National Fallen Firefighters Foundation Survivors program.

When she heard that the foundation’s executive director, Ron Siarnicki, was a former Prince George’s County’s fire chief, she decided to tell him that she had always wanted to thank those who helped her.

She got that opportunity on Monday. During the reunion, Hegewisch wiped away tears, and gave each responder a hug.

“We arrived on the scene, the dump truck had crushed the car and moved it off the road,” said retired paramedic Joe Liguori, who treated Hegewisch at the scene and got her to a hospital.

“Lisa was in the front seat and she had an open skull fracture,” Liguori said.

Liguori said that his wife, a nurse at Holy Cross Hospital, also treated Hegewisch.
Another first responder to the scene, Prince George’s County firefighter Melvin Batts, is still on the job today.

“I cut the seatbelt off of you, and I assisted with getting you there to the hospital. And I was there and I helped. And that’s what I do, and that’s what I love to do. And I’m going to keep on doing it,” he told Hegewisch.