As polls closed in the D.C. area, Hillary Clinton cruised to victory in Democratic-leaning D.C. and Maryland, but won a narrow victory against Donald Trump in battleground Virginia and fared badly in many other swing states across the U.S.
Listen now to WTOP News WTOP.com | Alexa | Google Home | WTOP App | 103.5 FM

WASHINGTON — As polls closed in the D.C. area Tuesday night, Hillary Clinton cruised to victory in Democratic-leaning D.C. and Maryland, but won a narrow victory against Donald Trump in battleground Virginia and fared badly in many other swing states across the U.S.

Clinton won a narrow victory in Virginia late Tuesday night, but Trump won a nationwide Electoral College victory early Wednesday morning. Despite Clinton’s Virginia win, many other swing states, such as Florida, North Carolina and Ohio, all went to the Trump column. The Republican businessman performed better than expected in all three states on Election Day.

Polls closed at 7 p.m. in Virginia, with vote-counting totals trickling in, particularly in the Northern Virginia counties and in the D.C. suburbs that are considered a Democratic stronghold.

The Associated Press named Clinton the projected winner in both D.C. and Maryland shortly after polls closed there at 8 p.m.

There were 13 electoral votes up for grabs in Virginia, 10 in Maryland and three in D.C.

Clinton went into Election Day with a lead in most polls, although the actual race proved to be tighter than expected.

Clinton handily carried the Northern Virginia counties and D.C. suburbs. In Fairfax County, the commonwealth’s most populous county, Clinton notched some 354,486 votes — about 64 percent of the vote — to Trump’s 157,547.

In Loudoun County, which Obama carried by a much smaller margin than other Northern Virginia counties in 2012, turnout was up by 20,000 votes. Clinton carried the county with about 55 percent of the vote, with 2 precincts still to be counted as of 7:30 a.m.

Clinton carried Prince William County with 54 percent of the vote, although voter turnout in the county was down from 2012 levels.

Clinton is the first candidate since Bob Dole in 1996 to win Virginia but lose the election.

Clinton also handily carried Maryland with more than 59 percent of the vote, buttressed by a strong showing in the counties that make up the D.C. suburbs and which are home to many of the state’s Democrats.

Turnout in Montgomery County was about on par with 2012 levels. Clinton carried the county with 76 percent of the vote.

Turnout in Prince George’s County was about the same as 2012, although Clinton carried the county with 89 percent of the vote.

Overall, registered Democrats outnumber Republicans by about a 2-to-1 margin in the state.

Clinton carried solidly Democratic D.C., with 90 percent of the vote to Trump’s 3.9 percent.

Since the District was granted three electoral votes in 1961, the city has never voted for a Republican presidential candidate. 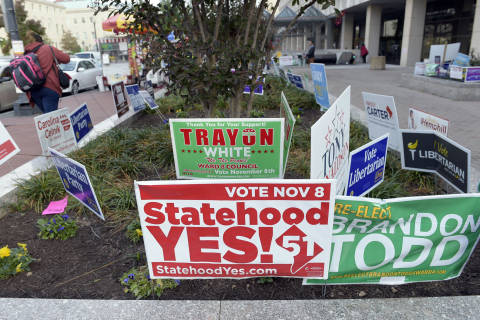