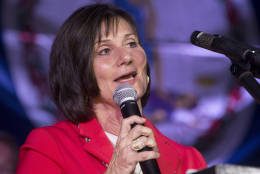 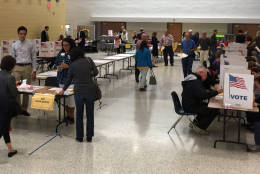 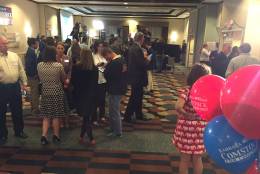 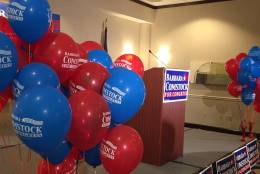 Republican Comstock garnered 53 percent of the vote to Bennett’s 47 percent.

Comstock, a freshman lawmaker who previously served in the Virginia House of Delegates, faced tough and well-funded opposition from Bennett, a developer, in the Northern Virginia district that stretches from McLean and Manassas to the Shenandoah Valley. Polls showed the region was backing Hillary Clinton for president over Donald Trump, which was expected to have helped Bennett, who has no experience in elected office.

“We are all in this together in this wonderful district,” Comstock told supporters gathered at a victory party in Loudoun County.

The race was considered a tossup going into Election Day and was among the most hotly contested races in the country. Millions in outside money poured into the race, inundating the airwaves and mailboxes with attack ads from both sides.

But Comstock said negativity could not beat her coalition of support, and she thanked young people for voting and campaigning for her.

“We couldn’t have done this without every one of you. This win is your win,” she said.

Bennett told her supporters in Falls Church that she had congratulated Comstock on her win.

“In spite of the results, I am optimistic that the future for America will be a bright one,” Bennett said.

Comstock campaigned on her record of working with the D.C. region’s many Democrats and argued the region would benefit from having a Republican member of the GOP-controlled House.

Democrats had hoped to flip the seat and two other open seats. One of those — the 4th District — was won by state Sen. Don McEachin, a Democrat, over Republican Mike Wade, the Henrico County sheriff.

Although the 4th District had long been represented by a Republican, McEachin’s election was no surprise. The district boundaries were altered significantly after a panel of federal judges ruled that black voters had been wrongly packed into a neighboring district. The redistricting made the 4th, which stretches from the Richmond suburbs to parts of Hampton Roads, significantly more friendly to Democrats.

The district had been represented by Republican Randy Forbes, who tried unsuccessfully to run in the 2nd District after the new boundaries were drawn.

The district includes portions of Fauquier County and runs through Charlottesville and south to the North Carolina line.

Garrett, of Buckingham County, is a former commonwealth’s attorney. He’ll fill the seat vacated by Republican Robert Hurt, who chose not to run for another term. Dittmar is a former Albemarle County supervisor.

Wittman had won 61 percent of the votes.

The district is a Democratic stronghold that includes Arlington, Alexandria, Falls Church and parts of Fairfax County.

Statewide, Virginia voters rejected a bid to enshrine the state’s right-to-work law in the Virginia Constitution, with 52 percent of votes against the proposed amendment with 99 percent of precincts reporting.

In Fairfax County, voters shot down a proposed 4 percent meals tax that would have supported the county’s schools system and slightly reduced property taxes.

Board of Supervisors Chair Sharon Bulova said she was disappointed with the result; 54 percent of voters rejected the meals tax referendum, according to unofficial election results.

“Fairfax County residents can be sure that their county government will continue our efforts to maintain the quality of life our residents value and rely upon,” she said in a statement posted on Facebook.

Turnout was heavy in Fairfax County — the state’s largest jurisdiction — where 80 percent of registered voters had cast a ballot as of 6 p.m., including absentee voters.

Some voters’ names were not in poll books, but they were able to vote a provisional ballot, the state Board of Elections said.

And some poll workers in the county were incorrectly telling voters that driver’s licenses were the only form of photo identification that could be used to vote. No voters were turned away, however, and the poll workers were reminded that other forms of ID are accepted.

Voters encountered lines and waits at polling locations around the region throughout the day; however, no major problems were reported. Even so, turnout statewide was down compared with past presidential elections — just 68 percent of registered voters cast ballots in the marquee matchup for president.

Several precincts in Norfolk and Richmond still had voters waiting to cast ballots as of 8 p.m., an hour after the polls closed, said Elections Commissioner Edgardo Cortes. He said voting went smoothly and safely otherwise.