Bryan Bresee had a sack, forced a fumble, recovered another fumble and rushed for a touchdown as Damascus beat Linganore, 38-0, in the Maryland 3A championship game.
Listen now to WTOP News WTOP.com | Alexa | Google Home | WTOP App | 103.5 FM

The focus has been on Damascus High senior Bryan Bresee for quite some time.

The 6-foot-5, 290-pound defensive lineman is one of the nation’s top recruits in the class of 2020. He’s accepted a scholarship to play for College Football Playoff-bound Clemson University. Opposing coaches and players are always aware where Bresee is on the football field.

And yet, through all the double teams and the schemes designed to slow him down, Bresee has remained at the top of his game. This past Thursday, he was a wrecking crew one more time, leading the Swarmin’ Hornets to their fourth state title in five years.

Bresee made five tackles, had one sack, forced a fumble, recovered another fumble and made an appearance in the backfield on offense, rushing for a touchdown as Damascus beat Linganore, 38-0, in the Maryland 3A championship game at Navy-Marine Corps Memorial Stadium in Annapolis.

For his efforts, Bresee was named the Military Bowl DC Touchdown Club High School Football Player of the Week.

“He’s done a remarkable job,” Damascus Coach Eric Wallich said. “It’s been a long time since there was somebody dealing with the kind of scrutiny he has faced. He’s very mature. My challenge is getting the best out of him and not hurting the other players on our team. Because if he goes full tilt in practice, people are going to get concussions.

“I told him a long time ago: Stay humble, stay hungry and stay hard working. And he’s done that.”

Friendship Collegiate RB Kevon Campbell rushed for 123 yards and a touchdown as the Knights beat Dunbar, 20-0, in the DCSAA Class AA championship game.

Middletown QB Reese Poffenbarger passed for 318 yards and four touchdowns as the Knights beat Potomac, 34-15, in the Maryland 2A championship game.

Tuscarora RB Bryce Duke rushed for 203 yards and four touchdowns as the Huskies beat Salem, 36-20, in a Virginia 4A semifinal.

South County WR/DB Brock Spalding had nine catches for 89 yards, including a sensational one-handed touchdown catch, and made a game-ending interception in the end zone as the Stallions beat Westfield, 28-21, in a Virginia 6A semifinal between previously undefeated teams.

Wise QB Jayden Sauray completed 14 of 23 passes for 233 yards and two touchdowns, rushed for two touchdowns and passed for a two-point conversion as the Pumas beat Northwest, 35-14, in the Maryland 4A championship game. 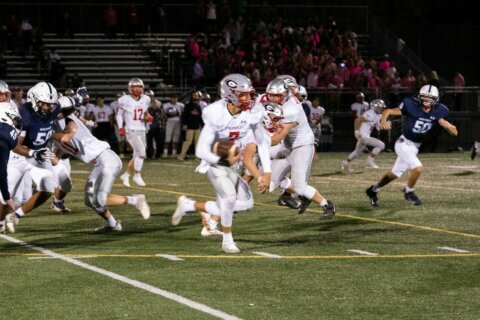