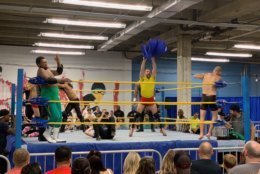 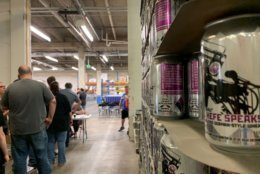 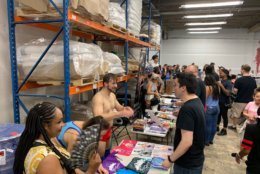 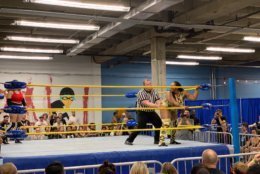 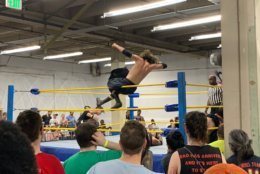 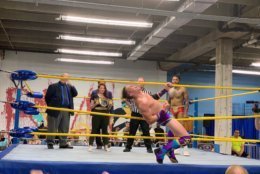 Share on Facebook. Share on Twitter. Share via email. Print.
Inside a stiflingly hot concrete bottling room deep in the back of a brewery might be the last place you’d expect to find a professional wrestling show, especially on the middle of a Sunday afternoon, and especially in the District of Columbia. But, then, that’s all sort of the point of Grapitol City, the first professional independent wrestling event in the District in decades, which went down in front of a sold-out, standing room crowd of a little more than 300 onlookers at DC Brau this weekend.

One fan in the front row sported a shirt that read “Pro Wrestling Is For Everyone,” and considering both the variety of performers and attendees, it was a hard sentiment to argue with. There were people of all shapes, sizes, colors and styles, sweating out beer together in this industrial space on the middle day of Memorial Day weekend.

With no fancy Jumbotron, information dissemination comes down to the PA system, which, in a boxy, concrete space filled with fans blasting at full tilt, isn’t the clearest. It became obvious very quickly that this was not going to look much like the light-and-smoke-and-pyrotechnics laden shows of WWE. But that only put more of the focus on the actual ring, complete with the same bouncy ropes and slaptastic mat that rings out like a gunshot every time a body hits it at a million miles an hour.

Paying anywhere from $15 (standing room) to $25 (front row), fans packed in to see nearly three hours of bouts, which culminated in promoter Prime Time Pro Wrestling’s first championship match. They were treated to a bit of everything: a battle royale; surprise, off-the-card appearances; melees spilling into the crowd; all-male, all-female, and coed matches; and, finally, a champion crowned. Other than a couple early lulls, the crowd seemed very much on board, even generating an impromptu “This is awe-some” chant during the final match.

“The fans are a Greek chorus. They are a character,” said Lolo McGrath, one of the organizers. “If the fans are really quiet and sitting on their hands the whole time, you don’t have a good show. It’s really necessary to have a really excited fan base.”

Originally from Richmond, Virginia, Lolo McGrath has been in the D.C. area for eight years, bartending at DC9 for the last four of those. She saw a void in the indie wrestling scene in the District — which hasn’t had a bout in quite some time, though nobody can quite seem to recall the last one — and decided to try to help fill it herself.

“The wrestling community in the DMV is really tight-knit, but hasn’t had many outlets for going to see wrestling,” she said. “There’s promotions based in Maryland, there was a promotion based in Northern Virginia, there’s plenty in central Virginia, but there’s been nothing in D.C.”

Between bouts at intermission, still in full costume, performers are backed up to a steel rack housing 55-pound bags of malt and oats, standing in front of their merchandise tables, signing autographs, selling T-shirts, photos and other wares. A custom rubber wristband here, a coffee mug there, even a pair of novelty Buddy Holly glasses courtesy of Francis Kip Stevens, aka One Tough Nerd.

Everyone has a shtick and a style, the more distinct the better.

“Most people make their own clothes, they find their own prints,” said Faye Jackson, a crowd favorite who wrestled for two years on the Virginia circuit. “They go to gearmakers, or they’ll find a fashion designer. As a wrestler, you have to stand out. You are your brand.”

Jackson is wearing an extravagant print she saw Beyoncé rock on her On the Run tour and decided she needed to have it. Some extensive Google searching and a tailoring later, it was hers.

“I saw the print — she had it with a bodysuit with the stockings, and I was like, ‘I want that,’” she said. “So I searched, hard.”

Despite the favoritism, Sunday wasn’t her day, as she was pinned in her opening match. The day belonged to Breaux Keller, a tall, wide-smiled, indefatigable showman clad in purple, bright blue and yellow accents and not much else, with both sides of his head shaved around a flop of electric blond hair too carefree and tangled to evoke anything political, only pure theatricality. He’s billed as being from Cockeysville, Maryland, but is actually from just across the Pennsylvania border in the Amish country section of the state, where he works a full 40-hour week for a restaurant supply equipment distribution website.

“Since February, I’ve had between one and three shows every weekend. It’s not slowing down anytime soon,” he said after his win. “I love it, when you have an atmosphere like this. You can feel their passion along with your own.”

Among the performers, there are plenty of Acela Corridorians, with some coming from as far as Tennessee or Kentucky. Jackson, who now hails from New Jersey, wanted to make sure she made the first D.C. event in decades, even if it meant a brutal overnight commute.

“The day before today, I was in Cleveland,” she said. “So I drove from there to here, because this was the first event in D.C. in, what, forever? So why wouldn’t I want to be a part of this?”

She’s traveled as far as Germany to perform, and will be going back again later this year. McGrath said that for this any given event, performers appearance fees range anywhere from $50-$500, plus highway tolls.

Prime Time Pro Wrestling is already looking to build off the success of their inaugural event. They’ve planned a return to DC Brau for July 28, where Keller will defend his title. McGrath is hoping to add a few more events this year, and expand “exponentially” next year. For those thinking of attending but are unsure quite what to expect, McGrath said you’ll get out of it whatever you put in.