DALLAS (AP) — Evgenii Dadonov scored in overtime to give the Vegas Golden Knights a 3-2 comeback victory over the Dallas Stars on Wednesday night.

Shea Theodore scored the first goal for Vegas, followed by Jonathan Marchessault, who tied the game with a shot from the left faceoff dot with 1:02 remaining in the third. Laurent Brossoit, making his first start for the Golden Knights, stopped 32 shots.

For Dallas, Luke Glendening and Alexander Radulov scored, and Anton Khudobin had 18 saves.

The winning goal came on the last of Vegas’ season-low 21 shots on goal. Dadonov picked up the puck inside the right faceoff circle, turned and sent a shot past Khudobin. Nicolas Roy assisted.

“He deserved one,” Golden Knights coach Peter DeBoer said. “He’s worked so hard and he’s been snakebit. One guy that needed a goal, and it was him. He’s had a lot of chances.”

Dallas had plenty of chances Wednesday, with 34 shots to tie its season high.

“That’s probably the best game we’ve played,” Stars coach Rick Bowness said. “We created the most offense. The goalie made some incredible saves, we hit a couple of posts and that’s the story. (Jason Robertson) hits the crossbar in overtime. You’re talking half an inch there.”

Robertson’s shot off the crossbar was not the only close call for Vegas late in the game. Glendening, who scored Dallas’ first goal 2:20 into the game, had a breakway with 20 seconds remaining in regulation.

“(Tyler Seguin) made a great play,” Glendening said. “I just tried to get it on net as quickly as I could, and he got his pad out.”

Two was the magic number on Wednesday: Glendening and Theodore picked up their second goals of the season, both teams scored on their second shot and also used their No. 2 goalie.

Vegas had gone 16 minutes without a shot on goal until Dadonov put a wrist shot off Khudobin’s pad with 5:59 to play. Khudobin followed with an arm save of Reilly Smith’s snap shot 24 seconds later.

Glendening deflected a shot from Miro Heiskanen at the right point past Brossoit. After a Dallas giveaway, Theodore beat Khudobin at 3:47. Theodore also had an assist on Wednesday.

Despite Dallas’s 15-5 advantage in shots on goal in the first period, it ended in a 1-1 tie. Dallas broke that at 6:56 of the second, when Radulov tipped in a high shot from the right point by Jani Hakanpaa.

NOTES: Golden Knights LW William Carrier was helped off the ice five minutes into the second period after going down while blocking a shot by Dallas RW Denis Gurianov. … Radulov’s first goal of the season gave him five points (three goals, two assists) in his last three games against Vegas. Heiskanen has four assists in his last two games vs. the Golden Knights. … Robin Lehner had started Vegas’ first six games. … Vegas failed to score on its only power play, leaving the Golden Knights 0 for 15 this season. The Stars have successfully killed 18 of 21 power plays in their seven games.

Golden Knights: At home against Anaheim on Friday. 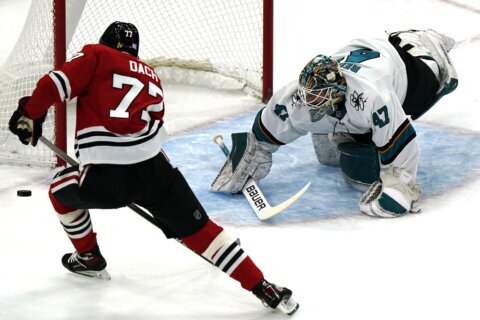