PITTSFORD, N.Y. (AP) — Try as the Buffalo Bills might in seeking to start fresh on a new season, the sting of those infamous 13 seconds still lingers some six months later.

In opening training camp on Sunday before a sold-out crowd of about 6,000 fans serving as a loud and boisterous backdrop of the sky-high Super Bowl expectations revolving around the team, the Bills were unable to finish the day without reflecting back on how their previous season ended abruptly in January.

The disappointment of blowing a three-point lead in the final 13 seconds of regulation of an eventual 42-36 overtime loss to Kansas City in an AFC divisional playoff remains hard to shake.

Quarterback Josh Allen declared, “We’ve got a new mindset,” before adding: “We’re a team that’s got to find a way.”

Without mentioning the playoff loss specifically, coach Sean McDermott addressed a question about expectations by noting: “The experience that we went through last season should help us this season.”

And safety Jordan Poyer shook his head in recalling how ticked off he became upon being asked about what happened in those final moments while appearing on former Chiefs receiver Tyreek Hill’s podcast this spring.

“That stuff definitely motivates you in the offseason. But obviously, it’s a new year,” Poyer said. “You don’t want to dread in the past, because then you can’t look forward in the future.”

“I’m glad that the people like us. I appreciate that. But it doesn’t mean anything,” general manager Brandon Beane said. “The AFC is stacked. I mean, whoever makes it out of the AFC (will have) had a heck of a year this year just looking at that gauntlet. I’m not even worried about the other half of the league.”

On paper, at least, the Bills have reason to be counted among the NFL’s elite.

At 26 and entering his fifth season, Allen has established himself as one of the league’s top quarterbacks. The NFL’s top-ranked defense a year ago, meantime, upgraded a middling pass rush with the free-agent addition of Von Miller, the league’s active leader in sacks, who is fresh off of winning his second career title with the Los Angeles Rams.

Poyer expressed hope he and the Bills can reach a contract extension, with his new agent, Drew Rosenhaus, attending camp. The 31-year-old Poyer is entering the final season of his contract and skipped all of the team’s voluntary spring practices before attending the team’s two mandatory sessions last month.

“Drew is here today talking things out with Brandon and I know they’re both working things out on each side,” Poyer said. “I’m just really excited to be here with my teammates and to see the guys again and to start this journey and try to get better every single day.”

The Bills are back on the road for camp for the first time since 2019 after COVID-19 limited the team to spend the past two years at its headquarters in Orchard Park, New York.

Much has changed since the Bills last made the 90-minute drive east on the New York State Thruway to the St. John Fisher campus in suburban Rochester, where they’ve held training camp since 2000. Aside from the Division III school going from calling itself a college to university, of the Bills 90-player roster only 26 have attended camp at Fisher.

Each of the 14 scheduled practices are sold out.

Allen was steps away from the interview tent when someone in the stands yelled out: “Josh Allen, you’re my father!”

A smiling Miller couldn’t get through his news conference without being interrupted by a nearby fan, chanting “Von Mil-ler!”

“The energy is just so great. It’s hard trying to come over here and do this interview with you guys,” Miller said. “You just want to shake hands and kiss babies and sign autographs and do all that stuff.” 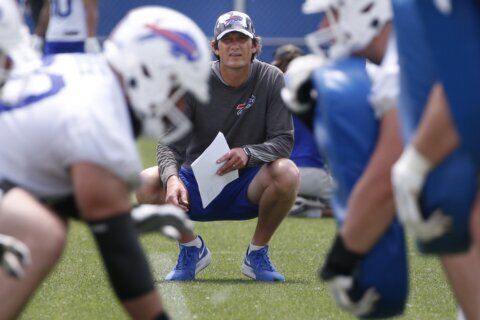