Can football and its players recover from the concussion crisis?

This is the final part in WTOP’s “Bad Brains” special report examining brain injuries in football, what doctors know about them and what’s being done to make the game safer.

COLUMBIA, Md.  — Improvements in technique and technology may help improve football safety. But is there hope for players who have already suffered brain injury, and can the sport recover from the damage to its image in time to save its dwindling numbers?

One of the scariest aspects of brain injury is the worry that it might cause permanent, irreparable damage. The horror stories of chronic traumatic encephalopathy (CTE) — from Junior Seau’s suicide to Bryan Price’s shocking incident this summer where he jumped through a glass door — are visceral reminders of just how little we understand about the long-term effects of a condition we are just beginning to study.

But is the damage reversible for young nonprofessional athletes? For those who have already been exposed to severe brain trauma, is there hope for recovery toward a normal life?

On one side is the heartbreaking tale of Zac Easter, a high school football player whose brain damage from repeated concussions eventually led to persistent headaches, horrible swings in mood and drug abuse, culminating in his suicide at age 24. But on the other side is Greg Ortman’s story, potentially providing a shining light in the darkness.

The concussion effect beyond the playing field

While he was a star running back at Centennial High School in Ellicott City, Maryland, Ortman suffered a severe concussion during his senior year and noticed his academics suffering. But knowing that Ortman was already committed to St. Francis University to play football the next year, his mother Kate thought the drop-off might have been a simple case of senioritis, a carefree kid mailing it in for the final semester of high school.

When Greg went off to school, things got worse. He transferred to Salisbury University, but that wasn’t the solution. He doesn’t know exactly how many concussions he suffered between high school and college football, just that it was more than five. Already struggling on the field and off, his situation was compounded by another brain injury.

“I experienced a concussion in spring football, and [my grades] just plummeted even more, to the point where I was ineligible,” he said.

“He went on to not being able to pass any class in college,” Kate said. “Really had trouble with anger and depression. Came back home. He had trouble keeping a job. He ended up not driving because of blackouts. Just a whole slew of things.”

It was right around that time that Kate was working with another of her children, who was coming off a major non-football-related brain surgery, using training techniques to help in the recovery. One such program was Interactive Metronome, a game designed to help patients sync up their physical response to mental stimuli, sharpening reactions and helping rebuild neural pathways.

“It’s used a lot by the military for traumatic brain injury recovery,” said Kate. “Tapping hands, tapping feet, crossing over midline. … You’re trying to get your brain and your body better connected.”

Kate saw something that might not just be able to help others, but possibly Greg as well, because many of his symptoms mimicked those of brain-injured war veterans. Greg was reluctant at first to try the programs himself. But after a few months of being unable to work or take classes, he gave it a shot. He noticed immediate improvements in his mood and his focus, helping him with his job working at a gym.

“The headaches started to stop,” he said. “Even at work, I was more efficient.”

Pretty soon, he felt organized enough to try getting back to his life before his concussion issues.

“I started noticing something in like four or five months, where I felt like I could go back to school,” he said.

Now 26, Greg has completed his associate degree and is working toward attending occupational therapy school. He works as an athletic trainer and shows no lasting ill effects from the issues that forced him out of school just a few years ago. Meanwhile, Kate ran with that success and turned it into an ever-expanding business, Brain Training of Maryland.

“We know we can rewire the brain,” said Kate, something that is especially true in young brains due to their neuroplasticity, or ability to compensate for or re-establish once-blocked pathways. “That’s proven, so that we can build new neural pathways, new neural connections. … As we build and strengthen those pathways, we have greater capacity in our brain. When our brain is functioning better, then the anxiety and the depression part will also lessen.”

Greg has become the literal poster child for Brain Training of Maryland, with his face featured on the front of their advertising. And while every incidence of brain injury affects individuals differently, and Greg’s improvement is largely anecdotal, it shows just how much we still have to learn about the breadth and depth of injury types and potential recovery from them.

Even with Greg’s perilous history, Kate isn’t ready to tell others to give up football.

“If you’ve had a concussion, I don’t want to say, ‘Don’t play whatever your sport or your love is again,’” she said. “I have a lot of collegiate athletes in my family, and I know sports is super-important to them. But recovery and prevention is paramount.”

Greg’s recovery offers hope for individuals searching for ways to recover from brain injury. Whether the sport of football can recover is another matter.

High school football remains incredibly popular. A National Federation of High Schools survey found more high school athletes playing football (1.08 million) than any other high school sport in the 2014-2015 school year, despite an almost entirely male enrollment (there are just over 1,500 girls playing 11-player football nationwide). But there are signs that those numbers may be in jeopardy of perilous decline.

Football-crazed Texas has bucked the trend as a whole, seeing a 3.8 percent rise in high school participation since 2002, according to a study released in the September edition of Texas Monthly. But even it hasn’t been immune to the crisis. In tiny Troy, Texas, (population 1,915) participation has dropped so significantly due to fear over head injuries that several age groups are on the brink of no longer being able to field teams.

“There’s so much fear out there.”
— Dr. Shane Caswell, youth sports concussion specialist

There’s been only one local high school to lose its varsity football team this year, but it’s a notable one. Despite an enrollment of more than 1,400 students, Centennial High School, Greg Ortman’s alma mater, shuttered its program due to a lack of interest.

The same story is being told across the country. Michigan has lost 57 high school teams, California 28, and Missouri 24 over the past five years, according to The Washington Post. Part of the reason lies in a precipitous drop in youth participation, the system that grows the next generation of players.

“A lot of parents were getting scared and keeping their kids from playing contact football,” he said.

Opauski highlighted the adoption of rugby-style tackling in this year’s orientation with the hope that it would allay some of those fears and was at least somewhat encouraged by the response.

“Yeah, we picked up a few numbers this year,” Opauski said. “Not much, but we did gain a few from that. I mean, you still lose players every year just from the fear of a concussion.”

The film “Concussion” suggested potentially catastrophic fallout from a 10 percent decline in youth participation over the next few years. Despite the forward thinking from Opauski in getting ahead of the curve, the decrease in participation out of Loudoun County from 2012 to 2016 is staggering.

Those stark numbers create the potential for a downward spiral.

A reduction in the number of players participating means more playing both ways — offense and defense — leading to twice as much contact every game. This is especially true along the offensive and defensive lines, where even some larger schools have trouble finding athletes with enough physical size to fill those spots. More contact, more injuries, more fear — and more parents deciding to push their kids to other sports.

The research process and search for an answer that will allay those fears is still in its infancy. In addition to emphasizing cutting down on contact in practice, the group Practice Like Pros has begun scientific research of neuro-catastrophic injury in high school football, particularly pertaining to second impact syndrome. SIS occurs when someone still recovering from a concussion gets hit again in the head, causing potentially fatal brain swelling or bleeding.

In Texas, Team Safe Sports has developed an app to help prepare youth sports coaches for medical emergencies and help walk them through crucial diagnosis situations to prevent prematurely returning kids to the playing field. And back at George Mason, Caswell is working with colleagues to develop a salivary biomarker test, in which an athlete suspected of having a brain injury could spit in a tube on the sideline and get instant confirmation.

Until more studies are done and more is known about how brain injury affects children, Caswell recommends that parents ask as many questions as they can of any league their kids might join. That can cover anything from published policies about concussion education, protocol on return to play after injury, heat illness precaution and even preseason physicals.

These can all be scary issues to confront, which only adds to the frenzy around the sport’s viability.

If football in particular can’t evolve and prove itself to be safe enough to mitigate its losses, it may simply cease to exist in some communities.

Part III: Can technology save football? 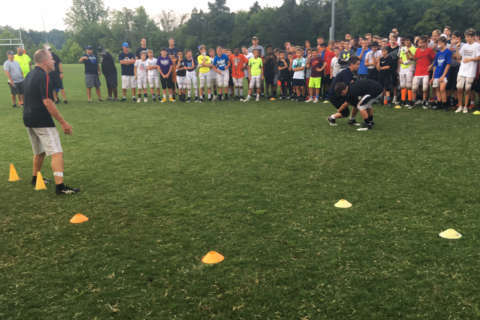 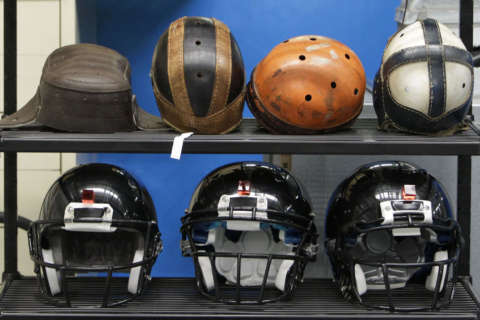 Can technology save football?