Veteran who died in 1952 finally laid to rest

Sheda and about 50 other service members were killed when their C-124 Globemaster aircraft crashed in Alaska on Nov. 22, 1952.

“There was a blizzard and the plane crashed into the side of Mount Gannett. Because the blizzard lasted three weeks and the explosion caused an avalanche, they never found the wreckage. [It] being the Korean War at the time, they got busy,” says Sheda’s daughter Catherine Remus.

Their bodies were never found. Until now.

Throughout the past three summers, artifacts from the crash were recovered — including the remains of some of the victims.

“The wreckage had become part of a glacier,” Remus says.  She was notified a few months ago that DNA testing identified the remains of 17 service members, including her father.

She was only three weeks old when she lost her dad.

“He got to meet me and he got to hold me. Back in 1952, men did not do things like diapers,” she laughs. “But my mom said he was very engaged and she taught him how to change diapers. And the cool thing was, on Monday at JPAC, they let me hold his remains. Then they helped me fold it in a blanket and secure it with pins. All I could think of was, he worked with big clumsy pins like this learning how to fasten my diaper and I get to close this finally for him. It was like everything came full circle.”

Remus, who lives in Knoxville, Tennessee, decided to bury her father at Arlington National Cemetery to honor his service.

“It feels like they were abandoned all these years and kind of forgotten about. … This is the most joyous occasion because he was lost for 60 years and he’s come home now.” 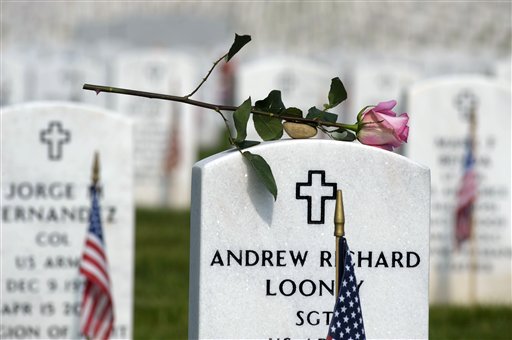