The new faces of GWAR speak -- and it\'s not pretty. The world as we know it is in peril, and these two ugly aliens are the only things preventing our complete desolation. Editor\'s note: The photos may not be appropriate for all ages.
Listen now to WTOP News WTOP.com | Alexa | Google Home | WTOP App | 103.5 FM
(1/5) 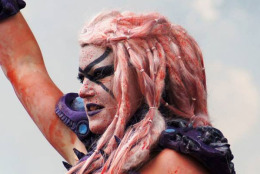 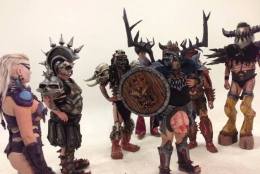 WASHINGTON — The world is in peril. Oderus Urungus has disappeared, and ancient scumdogs have been called forth to help solve the mystery.

In reality, the lead singer of the Richmond-based shock rock band GWAR died of a heroin overdose earlier this year.

In a 2013 interview with WTOP, Dave Brockie said he considered himself a kind of performance artist, albeit a blood-soaked and utterly profane one.

Fans wondered whether Brockie’s demise signaled the end of GWAR, but then the unthinkable happened when the band emerged from the ashes with a new lineup.

She comes to Earth from the year 69,000 wearing purple armor and not much else.

Vulvatron “was a high-ranking scumdog assassin in the battle against futuro-fascist forces,” GWAR explains on its website. “Her primary functions include mastery of the arts of war, quantum mechanics and intergalactic musicology.”

Like all GWAR members, there is a human behind Vulvatron, and her name is Kim Dylla, the heavy metal seamstress daughter of a famous physicist.

Prior to joining GWAR, she moonlighted as a custom leather-maker for bands such as Slipknot, Carcass and Arch Enemy. This was after a stint in digital humanities at the University of Virginia. Dylla, a/k/a Vulvatron, is in fact a Renaissance woman turned scumdog.

“Vulvatron was summoned by a great villain who is destroying GWAR and the universe as we know it,” she says.

“Oderus manifested himself to me in my time — in 69,000 — and so I have returned to GWAR to warn them to alter their course or everything as we know it will be destroyed.”

Women are not new to GWAR. Past members include Slymenstra Hymen, Amazina and Temptress, but they have largely remained in the background. Vulvatron stands out thanks to her bold attitude at the microphone.

“And now, all of a sudden, there’s a big, brash, bold new female personality on stage with a legendary band. Moreover, she’s just as gross and goofy as her male bandmates, whether she’s slaying dinosaurs or disemboweling Nazi skinheads onstage or drenching her minions with the aforementioned boob- blood.”

Vulvatron is not alone in her endeavors. She joins Blothar, who spews blood into the crowd from giant, testicular utters, as co-vocalists of GWAR.

He “is an ancient shape-shifting holy warrior from the planet Scumdoggia. [He] is known to associate with intergalactic outlaw biker gangs,” GWAR explains.

Blothar, whose human alias is Mike Bishop, describes himself as a kind of spiritual leader to the band who just happened to be recruited one day.

“Next thing I know, I wake up and I’m standing on stage in front of a bunch of strangers,” Blothar says in reference to GWAR’s first post-Brockie show at Riot Fest Chicago.

“I believe they especially enjoyed the boob spew,” Vulvatron says, referring to her sizable assets.

Unfortunately, Blothar wasn’t as pleased with their first performance.

Click through the gallery to see the new faces of GWAR, and watch the new lineup in action below: