Virginia theater pleads: ‘Save Our Butts’ 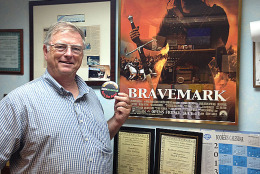 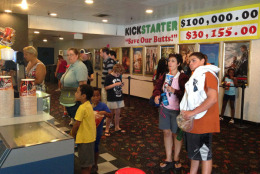 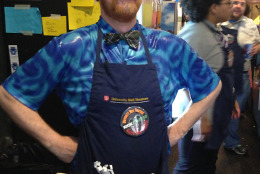 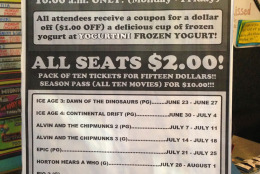 WASHINGTON — “How many you got?” University Mall Theatres owner Mark O’Meara asks a youth camp counselor who is busy escorting kids into the lobby.

“Forty-seven,” replies the counselor as his wards file in one by one.

The sheer volume of bodies crammed inside the theater might overwhelm some business owners, but not O’Meara. He is right at home amid the chaos.

For 23 years, the native New Yorker has steered this ship, and now O’Meara hopes to take his Fairfax, Virginia, theater to the next level by adding hundreds of new leatherette seats that will be wider and more comfortable.

The cleverly named “Save Our Butts” campaign has already raised about a third of its $100,000 goal thanks to word of mouth and a robust social media presence.

“It’s off to a great start,” says general manager Daniel Collings, who has been working at the University Mall Theatres for 19 years. “The community is really behind us.”

Collings is the mastermind behind the theater’s Kickstarter video, which he directed and edited on his free time. He also happens to be its star:

Even after almost two decades at University, Collings says he never grows tired of the hustle and bustle. What sets this movie theater apart from the competition, he says, is its loyal customers, low prices and hometown atmosphere.

“This place is a gift,” adds Ben Eckman, who has has been frequenting the theater with his daughters for about seven years.

O’Meara says this kind of loyalty is what keeps the second-run theater going. They don’t screen new movies and they don’t have a 3-D projector. Instead, University offers $2 Tuesdays, the chance to rent the theater for private events and “the best popcorn in town.”

“We get moves after they’ve been in the first-run theaters, but before they come out on DVD,” O’Meara explains. “We fill a niche no one else has in the area.”

When O’Meara opened University 23 years ago, he had no idea how long this plan would work. He had never even worked inside a movie theater, but insisted that bringing in enough customers would keep the business running despite competition.

“I arbitrarily picked $3 a ticket, and we did it,” O’Meara says.

“It was slow at first, but people kept coming in and asking how we did it so cheaply. Eventually, we built an audience and they just kept coming back.”

But keeping up with bigger theaters hasn’t necessarily been easy. Technology has made the movie-watching experience pricier and pricier for theater owners, who must constantly upgrade equipment such as digital projectors, which cost University roughly $200,000 to install.

For his latest improvement, O’Meara needs to replace 500 seats with modern leatherette chairs that will be roomier for patrons.

“The customers have to have fun,” he says. “This is their chance to escape.”

Obama steps out as nation confronts confluence of crises