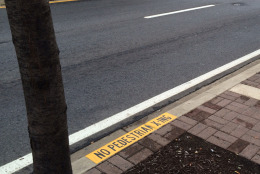 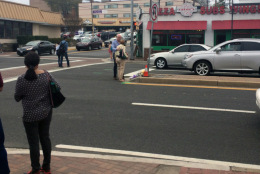 WASHINGTON — Big changes are coming to the Route 1 corridor in College Park, Maryland after three pedestrians were killed this year.

WTOP has learned that on Monday afternoon, the Maryland State Highway Administration will announce new improvements to part of the highway that runs near the University of Maryland campus.

The changes are aimed at curtailing accidents and improving pedestrian safety.

A university official, who spoke on condition of anonymity to discuss the plan ahead of the formal announcement, says the new measures will be “swift and significant.”

University of Maryland President Wallace Loh recommended SHA, which owns and maintains the highway, approve a median barrier along Route 1 from Knox Road to Guilford Road — a three-block stretch that is home to several popular bars and restaurants that get a high level of foot traffic on weekend nights.

“It is possibly one of the most dangerous stretches of state highway in the entire state,” Loh says.

The barrier is a priority and Loh hopes it’s among the upcoming improvements.

College Park City Councilman Patrick Wojahn (District 1) agrees: “There will likely be a barrier placed in the median on Route 1 in that area where there have been these pedestrian deaths.”

But he wants to consider the plans carefully.

“We want to make sure that it’s not something that will negatively impact the appearance of the Route 1 corridor,” Wojahn says. “We don’t want it to be something that will make it feel like a divided highway, which may cause traffic to move more quickly and may put more risk to the pedestrians that are crossing at the intersections where they should be crossing.”

Still, Loh says, the need to protect pedestrians outweighs the need for a pleasant landscape.

“Quite honestly, there are people in the city who do not want the barrier because they think it’s unsightly,” he says. “I think safety of the students take precedence. After three deaths in the span of six months, I think safety is taking precedence over aesthetics.”

Councilman Fazlul Kabir (District 1) calls Route 1 a “deathtrap” and says residents have told him they are discouraged from visiting the downtown College Park area because the highway is unsafe.

Three young adults were killed along this stretch since the beginning of the year, the most recent was 21-year-old Janelle Oni, who was killed last week by a drunk driver.

In January, University of Maryland student Cory Hubbard, 22, was struck and killed while crossing Route 1 near Knox Road.

Three months later at the same intersection, George Washington University student Carlos Pacanins, 23, was struck and killed while near a crosswalk.

If a barrier is one of the improvements announced Monday, Loh and the City Council are hopeful it can be completed by the time students arrive for the fall semester, which starts on September 2, 2014.

Officials also want the speed limit reduced from 30 to 25 miles per hour. WTOP has learned the state has completed a speed limit study of the area, but hasn’t released the results yet.

In addition to the barrier and speed limit change, Loh requested the intersection lights be synchronized.

“I’ve been there at 2 o’clock in the morning walking around,” Loh recalls. “There are intersections where the light changes before I’ve even finished crossing the intersection. So you have to coordinate the timing of the lights.”

“We’re making it physically, structurally safer,” Loh concludes. “However, that’s not enough. We need the cooperation of pedestrians and drivers. It is the responsibility of all of us. Be smart. Be safe.”