Holidays: 'Enchant' shines with millions of lights in Nats Park | Where to see holiday lights | Send in photos of decorations | How to give greener this season
Home » Latest News » Osprey nest removed from…

A pair of federally protected birds built a home in front of a Maryland highway camera along the Chesapeake Bay Bridge, but efforts to relocate their nest Friday morning led to its destruction.
Listen now to WTOP News WTOP.com | Alexa | Google Home | WTOP App | 103.5 FM
(1/3) 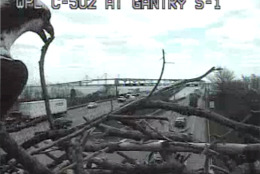 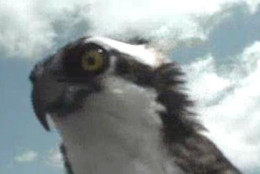 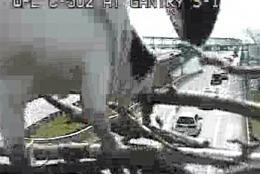 WASHINGTON — A pair of federally protected birds built a home in front of a Maryland highway camera along the Chesapeake Bay Bridge, but efforts to relocate their nest Friday morning led to its destruction.

Staff at the Maryland Transportation Authority first noticed an osprey nest growing up around the camera about a week ago, says John Sales, spokesman for the agency, which operates the bridge.

The nest sat atop a camera pole above the toll plaza facing the eastern span, Sales says.

Despite their choice of a nesting spot, the birds weren’t “fond” of the camera and had been attacking it, he says.

On Thursday, Sales told WTOP MDTA reached out to U.S. Fish and Wildlife Service for assistance in removing the nest. Fish and Wildlife as well as Animal and Plant Health Inspection Service gave MDTA the OK to relocate the nest as long as eggs were not in it, Sales says.

Ospreys are protected under the Migratory Bird Treaty Act but their nests can be removed from some structures without a permit as long as there are no eggs or birds in the nest.

The osprey has been seen returning to the camera with branches and sticks since the nest was dismantled early Friday. Sales says MDTA will follow the same procedure if the bird builds another nest at the same location.

“It didn’t work out the way they planned, but the bird wasn’t present and it was not injured,” Sales says.

If the bird returns and builds another nest at the same location, Sales says MDTA will follow the same procedure.

Osprey are a common sight at the bridge. But the pair’s nesting site was unusual, Sales says.

“We haven’t seen any pop up in the traffic cameras like this one.”