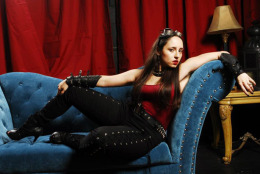 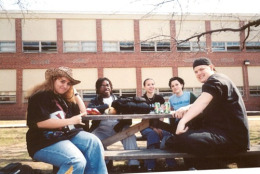 The journey started when her boyfriend at the time remarked that she would “look better” if she was thinner, but that isn’t what helped keep the weight off.

“There is no small amount of guilt when it comes to not looking your best on stage,” the 30-year-old says.

“I’ve got three other guys depending on me and I need to put on a good show for all the people who come see us, so there is no way I can let myself not work out every day.”

Despite feeling happier and healthier, Osegueda says she notices a double standard when it comes to female musicians.

“There are a lot of big, heavy guys in heavy metal, but no one would ever call them out on it,” she says. “But the moment you see a big girl on stage, oh my gosh, everybody gives her the business. …

“That being said, my diet and exercise is more for my own stamina than looks.”

Osegueda says she struggled with being overweight her entire life. By the time she was 19, the 5-foot-tall singer weighed 180 pounds. Osegueda assumed that was just her natural frame, until she discovered that exercising regularly and cutting down on carbs could help her slim down.

Once she started, she never stopped.

Now, with a 27-inch waist, Osegueda says she has more energy than ever before.

“I’m not at all skinny … but I have a lot of stamina. That’s what I want. I want to be able to run around,” she says.

And run around she does. Her band, A Sound of Thunder, sounds exactly like what the name implies: blistering drums coupled with ’80s speed metal riffs. The classically trained musician counts Dio, Iron Maiden and Death Angel as some of her biggest influences.

Osegueda started her singing career in high school with the Washington Opera, she says, but she got into heavy metal while in college when her husband took her to a DragonForce show at 9:30 Club.

She was instantly hooked.

“When I saw the way [the singer at the time] was projecting, and the way he was engaged with the audience … and the way people were responding to it, it was very inspiring,” she says.

“I love the singing style of power metal.”

Catch A Sound of Thunder April 21 at Empire in Springfield, Va. And read more about her weight-loss journey on CNN.com.

See the video for “Murderous Horde” below: