For some, a nice bottle of wine and a dry-aged steak set the standards for an exceptional dinner. But one international company is taking special-occasion dinners to new heights -- 50 meters, to be exact.
Listen now to WTOP News WTOP.com | Alexa | Google Home | WTOP App | 103.5 FM
(1/6) 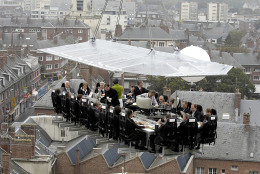 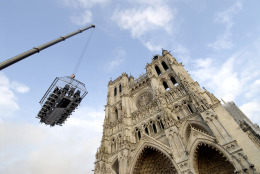 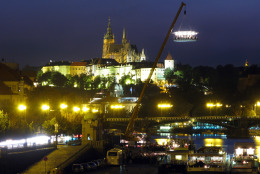 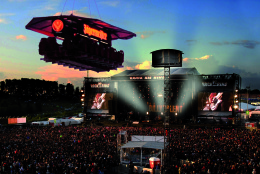 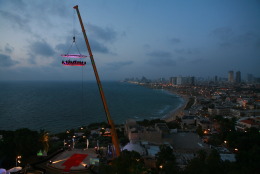 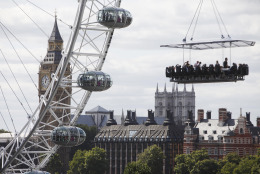 WASHINGTON – For some, a nice bottle of wine and a dry-aged steak set the standards for an exceptional dinner.

But one international company is taking special-occasion dinners to new heights — 50 meters, to be exact.

With its 150,000 pound platform and unlimited access to world-class chefs, Dinner in the Sky, a Belgium-based company, is working to elevate people’s taste buds and adrenaline levels.

David Ghysels founded the company in 2006 when he was working for a marketing agency that represented several well-respected chefs. At the time, his agency was looking for a way to profile the talent of its clients, and one employee offered the idea of a “suspended dinner.”

After working out the technical aspects of a sky-high meal, Ghysels put 22 chefs on a platform in the Brussels skyline for a photo shoot. Forbes Magazine saw the photo and listed it in its rankings for the 10 most usual restaurants in the world.

“We never imagined to start a business. We just wanted to satisfy the request from a client,” Ghysels says. “So that’s how everything started.”

Now, Dinner in the Sky operates in about 45 countries, including the U.S., Mexico and Canada.

The dinner aspect of Dinner in the Sky is unlike any other. That’s because dinner guests dine on a platform, not in a restaurant.

Ghysels says the platform is big enough to hold a table with seats for 22 guests. On the platform, there is an open space in the middle of the table, where the chef prepares the meal. There is also standing room for a service crew of five.

Once guests take their seats and buckle their seat belts, the platform is lifted 50 meters (approximately 180 feet) in the sky by a crane-like machine.

Ghysels says it takes approximately two to three minutes to get all the way to the top.

“It’s not so frightening because you have neighbors at your left and at your right, you have a table in front of you, your feet are on the platform and you are looking at a chef preparing and cooking for you