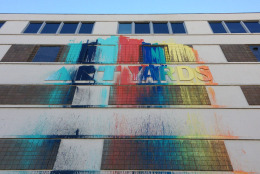 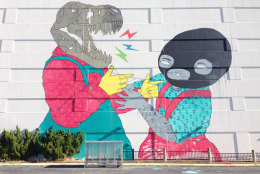 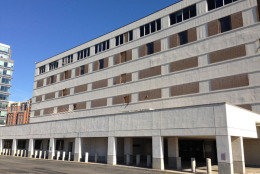 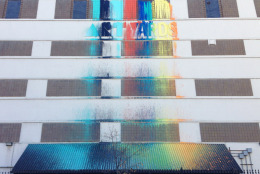 WASHINGTON — A coat of paint can do a lot.

A drab, empty building that once housed the National Geospatial-Intelligence Agency is getting some love in a colorful fashion.

The structure just blocks from Nationals Park will be torn down sometime in March 2014.

Until then, the building at M Street and New Jersey Avenue Southeast has become a large canvass for public art.

“We think that great cities have great public art, and we wanted to be able to use this building — as temporary as it may be — as a statement of public art,” says Gary McManus, the vice president of marketing communications for The Yards, a commercial and residential development adjacent to Nationals Park and the Washington Navy Yard.

On Wednesday, local artist Kelly Towles splashed the north-facing facade with more than 100 gallons of paint, forming a pour mural and a sign for Art Yards D.C.

Murals and other art projects are planned through December.

“We programmed a number of art installations involving seven different artists working in different media that are doing art on and around the building,” McManus says.

Two, large-scale murals will be done in graffiti style.

This weekend, a husband and wife team from Australia will add their brushstrokes to the building. And a chalk street artist from Baltimore is designing a 3-D acrylic work in the parking lot.

The artwork is visible from M Street, but art lovers can’t get close to the murals because of fencing that remains up from the federal agency.

However, Dec. 7 and 8 families and children will be allowed to see the 3-D acrylic art and make their own chalk art in the parking lot.

“Ultimately what we’re trying to do is raise awareness of this great new urban mixed use neighborhood on the riverfront between the ballpark and the Navy Yard,” McManus says.

The master plan for the site calls for an office building, which will require an anchor tenant committing to the site.

Once torn down, the area will serve as temporary parking for nearby Nationals Park.