Md. man gets speed camera ticket after driving under the limit

A Silver Spring driver has received a letter of apology from Montgomery County police for getting a speed camera ticket after driving 34 in a 35 mph zone.
Listen now to WTOP News WTOP.com | Alexa | Google Home | WTOP App | 103.5 FM
(1/4) 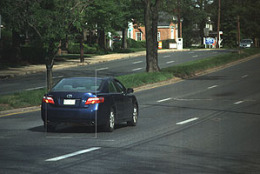 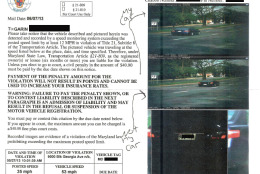 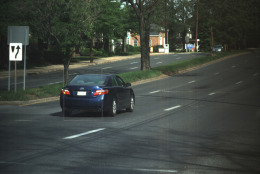 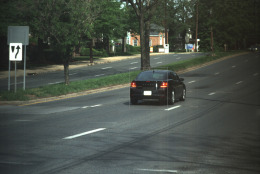 SILVER SPRING, Md. – A Silver Spring driver has received a letter of apology from Montgomery County police for getting a speed camera ticket after driving 34 in a 35 mph zone.

Garin, who asked us not to reveal his last name, was photographed driving north in the 9000 block of Georgia Avenue on May 27 at 9:37 a.m. However, the second picture on the ticket is taken at 10:01 a.m. and shows a completely different vehicle.

“My car was clearly going under the speed limit. The other car was clearly speeding and one image was taken 24 minutes after the other,” he tells WTOP. “Anyone looking at this should’ve immediately noticed the gap and said, ‘This is not right.'”

Montgomery County police Capt. Thomas Didone, who heads the department’s traffic division, admits the ticket was wrong and should not have been mailed out.

“The photographs, when they’re reviewed, are relatively small in scale and the two vehicles, while black and blue, are very similar in size and shape and did show progression (movement). It wasn’t like this was a white Corvette and a red Yugo. But that’s no excuse, because we expect perfection,” he says.

“Not everybody catches it,” Didone says. “But that’s not the standard. The standard is that you have to catch it. We recognize that human errors occur, but we don’t accept it.”

When Garin received the ticket in early June, he mailed a response to request a dismissal. Instead, he received a court date for early September. Garin contacted Ron Ely of the Maryland Drivers Alliance, who contacted Montgomery County police and WTOP TicketBuster.

Didone quickly noticed the error and launched a full investigation.

“A technician took a test shot and mismatched it with an actual speeding violation, thus creating the possibility of having two different vehicles in one citation. Both the civilian pre-approver and the officer failed to capture this,” he says.

According to the investigation, an error caused the Georgia Avenue camera to go offline on May 27. A Xerox technician restarted the camera, then accidentally attached the test shot at 9:37 a.m. with the first violation afterward at 10:01 a.m.

Test shots are used to calibrate the camera and make sure it’s working properly. Xerox State & Local Solutions has a contract with Montgomery County to supply the cameras and process citations. After Xerox forwards a citation to Montgomery County police, two employees review and approve or deny it.

In this case, Didone admits neither inspected the two pictures closely enough before approving it.

“The two employees involved will get counseling and additional training to determine how it didn’t get caught and how to make sure it doesn’t happen again,” he says.

Didone also held a meeting with his entire speed camera staff to review the case and discuss the error. While Didone believes program manager Richard Harrison would have spotted the error before the September court date, he agrees it shouldn’t have gone this far.

Montgomery County police also are talking to Xerox about technological shortcomings that contributed to the error.

First, reviewers cannot view full-size images without clicking on each of the two photographs. Second, a black data bar on the bottom of each photograph is virtually unreadable on the small size images. The data bar includes date, time, speed and other important information. In Garin’s case, the data bar would have revealed the error.

Didone says Xerox is working on a solution to both problems, which includes magnifying or enhancing the data bar.

Montgomery County police also ordered Xerox to inspect each ticket from the Georgia Avenue camera issued in the last 60 days to check for any similar errors.

Didone additionally wrote a letter of apology to Garin on July 1. Garin tells WTOP that he’s pleased with how the department handled his case.

“I’m very glad this happened in Montgomery County and not in D.C. because I have heard about the horror stories in D.C. about how the system is run,” he says.

“I give them full credit and I’m sure they’ll investigate it in a thorough manner. But as a citizen, it still doesn’t change how it adversely affected me.”

He believes the public should remain cautious.

“Errors like this are why we should be concerned that more subtle errors may be undetectable,” he says. “Montgomery County fought to ensure the legislature wouldn’t require accurate time-stamp evidence to allow independent verification of speed.”

Didone says other drivers in a similar situation should call 866-818-3844 or email speedcamera@montgomerycountymd.gov with evidence of the error.

If you think you’re the victim of a bogus speed camera, red-light camera or parking ticket in D.C., Maryland or Virgina, WTOP may be able to help you cut the red tape. Email us your case – along with documentation – to ticketbuster@wtop.com.

Bowing to Trump? GOP brings leaders, donors to his backyard