Next time, grab a pickle with your beer

While most people are familiar with the combination of beer with hot dogs or peanuts, but a local brother-sister team is pairing beer with their gourmet pickles.
Listen now to WTOP News WTOP.com | Alexa | Google Home | WTOP App | 103.5 FM
(1/3) 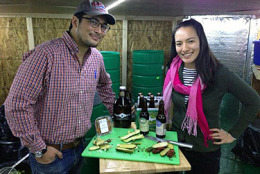 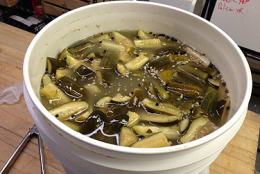 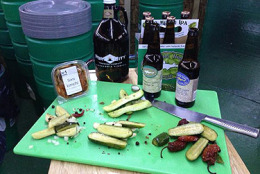 ARLINGTON, Va. – The garlic hits you as you walk in the door.

The dill, coriander and other pungent pickling flavors are deliciously evident during a visit to the Number 1 Sons pickle factory in North Arlington.

While most people are familiar with the combination of beer and hot dogs or peanuts, Number 1 Sons is pairing beer with pickles.

“They’re both fermented foods,” says Yi Wah Roberts. “They seem to have an affinity for each other. Alcohol likes big flavors and sometimes it likes the sort of acid that the pickles bring to the party.”

“I’m a girl, I think about what I’m eating. So I like knowing I’m eating something that’s good for me when I’m enjoying some beer,” she said.

Her brother said choosing the correct beer depends on the style of the pickle.

“It doesn’t fill you up and the flavor’s not so big that you find it overwhelming,” Roberts said.

In tasting the spicier District Dills, fermented in an onion-based brine with coriander and allspice, “we can do a more full-bodied beer – not quite a porter, but maybe a light IPA.”

Spicy with garlic and chili, the Kicky Kosher offers options like a light, easy to drink beer, or a sweeter beer or hard cider.

The newest pickle, Tailgate Mambo, is an invention using spices with a mambo sauce, a popular flavor in the D.C. area.

“You get a lot of layers of flavors, because they’re fermented,” says Caitlin Roberts. “You get the spicy, and the smoky, and the cinnamon all at different times.”

“You have the hoppy-ness to go with the pickle’s flavor, and it’s almost like eating barbecue and drinking beer together,” he says.

Number 1 Sons will be participating in beer and pickle pairing at D.C. Brau on Saturday, March 30.

The company’s products are available at local farmers markets.